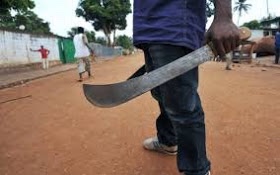 It was learnt that vital organs of the deceased were also severed by the suspected ritualists.

At the moment, residents, still in shock over the development, are afraid to speak to the press for fear of the unknown.

Men of the Nigeria Police Force, Oghara Division, have gone to evacuate the remains of the deceased.

When contacted, the Delta State Commissioner of Police, CP Muhammad Mustafa said, “The DPO actually called me; but they said the girl was not mentally okay.

“Yes, it is confirmed, but the DPO has commenced investigation to unravel the true story as to why the girl was beheaded.”