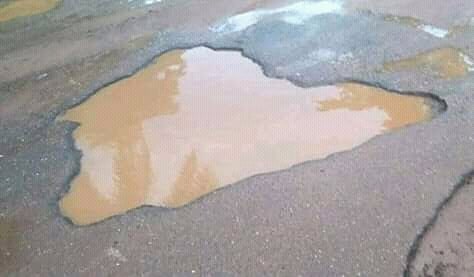 Citizens vent their frustrations on the government because of the devastating state of the roads they use everyday.

Once again, the Christmas season has brought excessive vehicular movement on Lagos roads. Over 5 million cars and 200, 000 buses both private and commercial move on Lagos road on a daily.

However, Lagosians, drivers and road users from various parts of Lagos have continued to cry out their frustrations at the terrible state of the roads causing them massive inconveniences everyday.

From Mushin, Ijesha, Ikotun, Ijegun, Ikorodu, Igbogbo to Ijede, Adamo and Mojoda, it has been one complain or another from residents and motorists over constant vehicle breakdown and wasted hours on the road. Kemberi road, Aka road and Jakande road in Ojo Local Governments are so bad we should all weep for them.

Our governor, Akinwunmi Ambode, had earlier directed immediate repair of all bad portions of the major roads after the rainy season ended but ignored the inner roads which have worsened over the years for lack of maintenance. A good number of them were left untouched and even the directive itself has not been completed.

Nigerians have described the pitiable state of the road in Oniwaya, Agege as a disaster. Solomon Ibe, a resident in the area, said that Oniwaya road was meant to play the role of an alternative route for motorists using Lagos-Abeokuta Expressway which was under construction, but it has not done that simple job.

“The road is bad and that also contribute to the gridlock we often experience on the road. While running away from the ongoing construction on Lagos-Abeokuta expressway, you run into another one on Oniwaya road which is caused by potholes.” he said.

A resident in Adamo joined in and said some of these inner roads were constructed years ago while others have suffered persistent shunning. Residents lamented that some of the roads were not even usable just as others were repaired through community money.

“Many accidents on motorcycles happen on the road during the raining seasons and we have cried out but government has ignored us.”

Alh. Owolabi Abdul-Fatah, an Ojo resident, while speaking on Aka road, said that the road serves as link for hundreds of motorists who want to avoid the traffic along Lagos-Badagry Expressway, yet it has remained unfixed since forever.

He said: “You can see the state of the roads within Ojo Local Government. We don’t have roads and that is why we often abandon our cars at home whenever we know that the community we are visiting has impassable roads. And for those that are still motorable, one will have to master the potholes and others. If he doesn’t do that, he may have himself to blame”.

As motorists within Agege Local Government moan and complain, residents of Ajao and Mafoluku axis on their part couldn’t believe the fact that they deserved this level of neglect from the government.

Asa-Fariogun has also been allegedly abandoned and cannot be competed against as one of the worst roads in the area.

A resident, Yemi Emmanuel, described Ajao Estate as an road currently being dominated by potholes, saying that Asa-Fariogun, which is the main road is in a condition we all should not be proud of.

A commercial driver, Sam Ibekwe also had his say. He said the Kola-Abule Egba road was not suitable for motorists. “We understand that Pen Cinema fly-over is under constriction but from Abule-Egba to Pen Cinema needs rehabilitation and that is not the responsibility of the drivers but government,” he added.

Commissioner for Works and Infrastructure, Mr Ade Akinsanya jumped in government’s defence and said that the LSPWC has hastened efforts to rectify the pothholes across the state.

“As I speak to you, the Public Works Corporation has intensified their rehabilitation of potholes across the State. We were initially held back by the rains, but with the dry season now, more roads have been covered in the last one month and we appeal to Lagosians to be patient, if you have not seen them in your area, they will get there soon,”

He pointed out roads in strategic areas across the state including Ikorodu, Itokin, Lekki, Ojota, Lawanson Road, Ogunlana Drive, Abraham Adesanya, among others have been fixed with motorists and passengers experiencing less pothole hassle by driving smoothly on the roads.

According to him, “massive road rehabilitation across the state has already been embarked upon and we will like to assure the public that all road corridors across the State will be touched by the various rehabilitation gangs who have been deployed to all nooks and crannies of the State.

“At the moment, areas already covered include Lekki–Expressway by Abijo and Abraham Adesanya roundabout carried out by Hi-tech Construction; Ojota, Ketu and Mile 12 sections of the Ikorodu road have been attended to, while work is also on-going on Ijede, Eru-Elepe road in Ikorodu, amongst others.”

He also added that ugly portions on Ajah-Badore and Mile12-Ikorodu road at under the bridge end have been completely rectified.

Nigerian man dies after sending out his wedding invitations in Kogi

Pastor Adeboye reacts to US visa restrictions on Nigerians

23 Nigerians, 1 Frenchman sentenced to 7 years in prison for sex trafficking in…