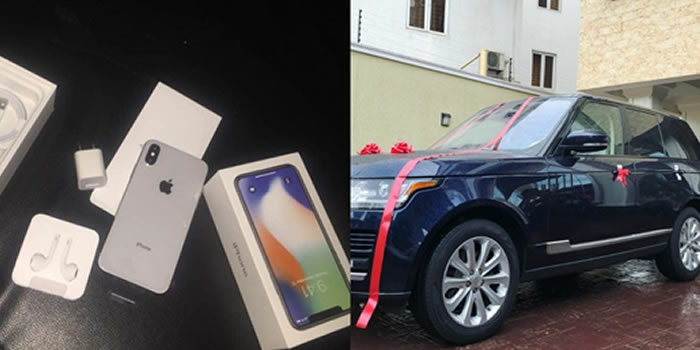 A Nigerian lady has taken to social media to call out her boyfriend after he bought her an iPhone X for Christmas.

The lady who shared her gist on Break_or_makeup’s Instagram page revealed that her boyfriend bought her a phone and bought his mother a car even after he had promised her a car.

According to her, the major reason why she is angry is because his mother is ‘old’ and ‘in the village’, and she’s someone who doesn’t need the car due to the fact that she can’t drive.

For the fact that her boyfriend never informed her before buying his mother a car, she wants to return the iPhone and end the relationship.

She wrote, “My boyfriend bought me a phone but I was expecting a car like he promised, this guy has promised to buy me a car for 3 years I have been with him now and this time he even wrote it on his ig handle and was bragging about it.

“He raised my expectations so high and after everything he bought me a phone and bought a car for his mum this Xmas. That was not even my anger, my anger was the fact that he did not tell me that he was buying a car for his mum that don’t even need it, because his mum is old and in the village so what does she need a car for.

“I am thinking of returning the phone back to him and ending this relationship. I feel insulted, this is a guy that I jump keke to go and fu.k, abort for him and even did 3 some with him but he had the guts to choose me over his Mum.

“Bom should I send it back to him or sell it and break up with him. Am I over reacting?

_franciecouture_: Who knows??? Probably he got the car for you but as a sensible dude,he thought of how his family will see it & decided to put his mum first so that when he gets you one,no issues will come up from his family side. Also, since you guys ain’t married yet,it’s better for him to do all that is required of him especially making his mum happy so that once he marries you, you both will live comfortably without thinking of what & what to do for mum too often thereby focusing more on building his own family. Just be patient. Your car is definitely next. My opinion though.

unshakable_andy: Babe read my lips u are the biggest fool of d century…. A gfrd comparing herself wit a mans mum shows her daft and stupid u are,by d way its a girl a guy has no plans for he cn do a 3 some with,, babe do urself a favor and go get a life. A wife shouldn’t even compare hrself 2 a man’s mum… Bitch of no gender…

gloryaaaahyohanna: He will choose his mother ten times over you, even if she is crippled who you bi??