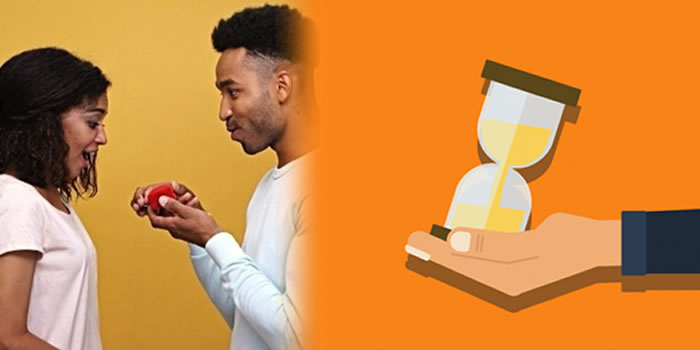 A story about a lady who gave her boyfriend a 6 months ultimatum to propose or risk loosing her, is currently trending on social media as many people have reacted to the story, sharing their thoughts as well.

Almost everyone dreams of finding the right one and settling down to a life of happy ever after. Although many have advised against rushing in to marriages, what really happens when the right one takes too long to pop the big question?

Well, this is the story of a lady who has been dating her boyfriend for 9 years. According to a Twitter user identified by his handle @thesylar_, his friend has just got a 6 month ultimatum from his girlfriend to either propose to her or risk loosing her.

The post reads: “My friend and his girl have been dating for 9 years now, he’s never proposed. Dude just called me, he’s been handed an ultimatum. She’s given him till June of this year to propose or she calls it quits.You can’t force a man to propose can you?”

My friend and his girl have been dating for 9 years now, he’s never proposed.
Dude just called me, he’s been handed an ultimatum.
She’s given him till June of this year to propose or she calls it quits.

You can’t force a man to propose can you?

As is common with relationship issues, the post immediately went viral on the internet, garnering massive reactions from many people who thought she was right to want to walk away even though they believed one couldn’t be forced to propose.

After 9 years he doesn’t have to propose it’s marriage straight. The girl doesn’t want Mumu investment

Yes you can’t force a man to propose but u can force him to come to his senses. It’s either we are in a committed relationship to each other as adults or that’s that. Everything and everyone has it’s limits. pic.twitter.com/Wmlnc2eyNg

9 years, c’mon he has to step up, that’s 6 years of secondary school and 3 years in university

You can ?. You cannot be wasting someone’s time for nine years.
Imagine if you’ve been working for a company for nine years without promotion and you can’t afford to look for better options outside how will you feel?

Many people described the 9 year relationship as a waste of time, considering women’s biological clock ticks faster than the men.

She’s not forcing him, she has every right to leave… That’s a LONG time to waste.. Women have a biological clock.. If she wants to leave & find someone else who wants the same things in life as she does it shouldn’t be a problem!

9years.. Haba na. If she quits , she should better collect gratuity ohh.. Some men don’t have the fear of God in them at all..

She’s even nice to give him till June. Which one is 9years of dating. What are you doing? Chemistry class? Abii he’s trying to form cloud 9 imitation?
If he now ends up ending it after den nko….9 years in d drain.

He can’t be forced to propose. If he feels satisfied with where their relationship is the he has no reason to take it anywhere further.

If she feels she can’t stay at that level without progress then she is well within her rights to leave. Forced commitments often end badly

While this lady has got her eyes on settling down with the right one who wouldn’t waste her time, a certain Nigerian lady identified as Nonny Blessing on Facebook, seems to have her priorities set on very different things.

She disclosed that she has got a very good man who gives her the sum of N100,000 to buy only ice cream, subtly throwing shade at broke boys who cannot afford to give their girlfriends as much.