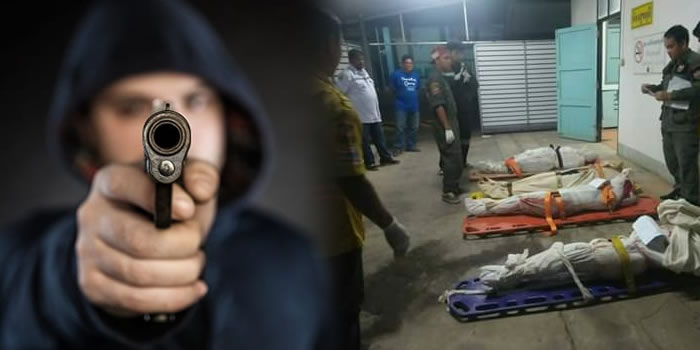 Police launch manhunt for man who murdered his pregnant wife, her parents, two other family members in Bangkok

Police in Bangkok are on the hunt for a 37-year-old Thai man, who brutally murdered five family members including his pregnant wife and her parents on Monday night.

Authorities believe they are getting closer to catching Ranong native, Theerapol Pin-amorn, as the vehicle he allegedly used to escape was found parked outside the Maya Hotel in Phitsanulok province’s Muang Phitsanulok district at about 9:30am today.

The manhunt has been on since 8pm monday night, following the report of a multiple homicide at two houses in Phichai District, located in the northern province of Uttaradi.

In the garage of the first house, officials found the lifeless body of Theerapol’s wife Kanyarat Kingkaew, who was four months pregnant, and his 46-year-old father-in-law, Wirat Kingkaew, reported Khaosod.

Five kilometers away, in a second house, police found the bodies of the suspect’s 53-year-old cousin Kanokwan Intharasit and twin sisters Nampheung (the suspect’s mother-in-law) and Nampha Intharasit, both 48. All five victims were shot with a 9mm pistol, reported Sanook.

Pichai district chief Pratchya Sertleucha said Theerapol has been living with Kanyarat for almost a year and that the couple often argued.

Police believe she broke up with Theerapol on the day of the incident, allegedly over his drug abuse.

That afternoon, the gunman allegedly first went to his mother-in-law’s house to look for his wife before shooting the first three victims in ange , reported The Nation.

He then drove to his father-in-law’s house, where, in disturbing footage captured by CCTV cameras, Theerapol can be seen arguing with his wife and father-in-law before pulling a gun out and shooting the 46-year-old man. When a shocked Kanyarat runs towards her father, Theerapol shoots her as well.

The two victims, lying on the ground, can be seen crawling towards one another before passing away in each other’s arms. Another unidentified woman — possibly Kanyarat’s younger sister — can be seen running into the scene before being chased out of frame by the gunman.

The Nation reports that, having heard the gunshots, Kanyarat’s sister, her husband and another male cousin went to investigate, only for Theerapol to allegedly open fired on them as well.

Though the sister was unharmed, the two men sunstained injuries and have since been transported to Uttaradit Hospital.