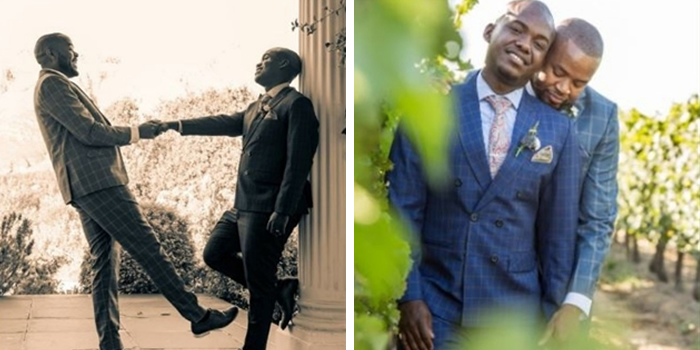 Mr and Mr Tau: Gay Couple gush about their relationship on social media

In a social media thread, indicated 2 men tied the knot as the caption read: “Mr and Mr Tau”. Social media users congratulated the couple but a few spoke out against homosexuality

There’s a general belief that homosexuality is still frowned upon in South Africa, especially within black communities.

A recent tweet tested that theory in which 2 men were pictured in a passionate embrace.

The photo was captioned:

“Mr and Mr Tau,” and the tweet went viral as many South Africans had their say.

It was gathered the 2 men tied the knot recently and shared their wedding photos with the world.

Many tweeps wished the couple well – Kgatishi Danke (@danke_kgatishi) and Bra Lebza (@BadadvocateO) were some of those who congratulated the couple.

Ayanda Moyo posed a tricky question as she asked,

“How did you guys decide whose surname to take?”

The one who paid the lobola.?

However, not everyone was impressed and aired their views on homosexuality.

Lesbianism and Gayism are awful practices. But the people engage in these practices are precious to God. God loves them the same way He loves you and I. When a man decides to have a fellow man as a lover, it's a sign of misplaced identity. That doesn't mean he's evil.

This is why women gets frustrated and every single chance they get on a guy .they get crazy to let go. There's no men out there anymore to service this women

As gathered via Briefly.co.za,  the vast majority of comments on the thread were indeed positive and that more and more South Africans have accepted homosexual marriages.

This so amazing. I saw your story on YouTube. Congratulations ??

Meanwhile, It had previously gathered the report that a public relations officer of the Zone 2 police command, Dolapo Badmus, had said that Nigeria is no place for homosexuals. She called on Nigerians to come forward with evidence proving anyone to be gay so that they could be dealt with accordingly.