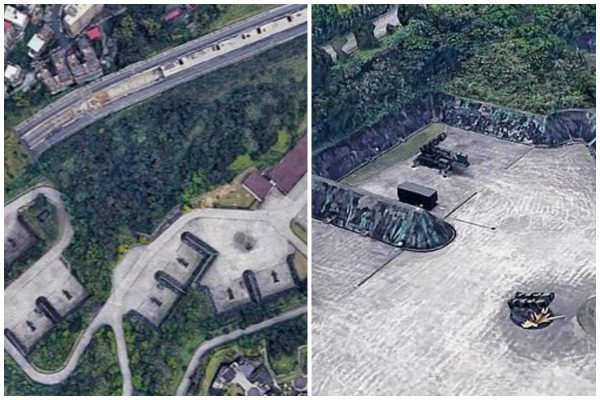 Taiwan’s top military secret has been accidentally exposed by Google Maps, as 3-D satellite images show the exact locations of its defence missiles.

According to Business Insider, Google Maps has opened up a can of worms with 3D renderings of the National Security Bureau, the Military Intelligence Bureau and what was, up until now, a secret Patriot missile base, as well as additional defence infrastructure.

Not only have the locations and structures been made visible, but you can even make out the types of launchers and models of the missiles at the sites.

Taiwan is in talks with Google to blur images of its most sensitive military sites that have been accidentally revealed to the public through its latest 3D-rendered maps.

The structures were disclosed after Google launched the new function on Wednesday to feature three-dimensional terrain for four major cities in Taiwan: Taipei, New Taipei, Taoyuan, and Taichung, according to Central News Agency.

Taiwan’s Defence Minister Yen Teh-fa said a task force had been established to work with Google to seek appropriate adjustments to safeguard national security and to protect the secret locations from being targeted by Beijing in the event of a cross-strait conflict.

‘Actually, the site of defence infrastructure at times of peace will not be the same as those at times of war,’ Yen noted

As he tried to assure the public that the exposure will not affect Taiwan’s military operations.