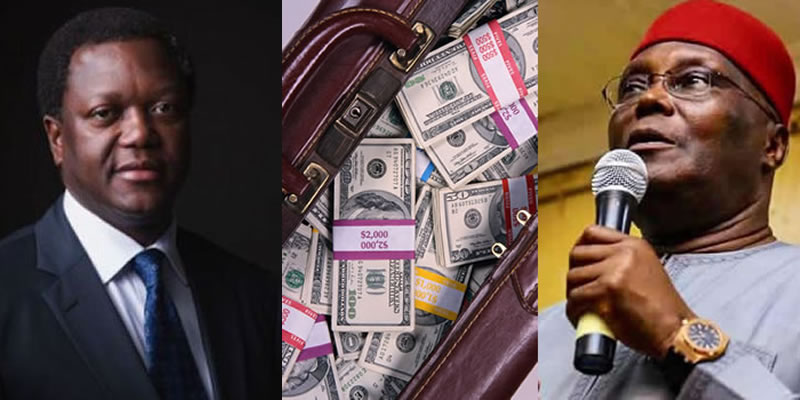 Mr. Uyi Giwa-Osagie is being suspected of allegedly laundering about $4million, which the Economic and Financial Crimes Commission (EFCC) believes to be “suspicious election cash”.

Uyi’s detention followed an intelligence report on a suspicious transaction by a Bureau De Change operator.

It was earlier  reported on Monday how the PDP reportedly allocated $3million each for “logistics” to its 36 state branches and the Federal Capital Territory (FCT) (read here).

Most Bureau De Change operators and banks have, however, refused the “pressure” to convert the hard currency to Naira.

An EFCC source said: “A BDC operator was intercepted for shipping $2million from Abuja to Lagos for suspected money laundering.

“Upon interception by our detectives, the BDC operator admitted that Uyi Giwa-Osagie actually paid the Naira equivalent of $4million into his account in exchange for hard currency.

“We invited Uyi for interrogation on Monday and Tuesday. Our detectives have also conducted a search of his home. Some useful documents were retrieved. Investigation is, however, still in progress.”

“Apart from documents relating to posh properties at home and abroad, a copy of the EFCC Investigation Report on Atiku’s relationship with a jailed U.S. lawmaker, Williams Jefferson, was retrieved from Uyi.

“ An analysis of the account indicated that it yielded over $30million deposits mostly from a firm with a link with the PDP candidate,” the source said, pleading not to be named because of the “sensitivity” of the matter.

He added: “Obviously, there were remittances from the account of a multi-national company linked with the PDP candidate.”

Responding to a question, the source said: “We closed in on Uyi on Monday. We have decided to detain him pending the conclusion of investigation. “

Another source described Uyi as “a reputable lawyer to Atiku”. “It is not out of place if Atiku’s dossiers are found with him.

“ You also need to appreciate his  background and antecedents, he is from a very wealthy heritage. By the time he opens up, the EFCC will know that he is not an overnight associate of Atiku.”