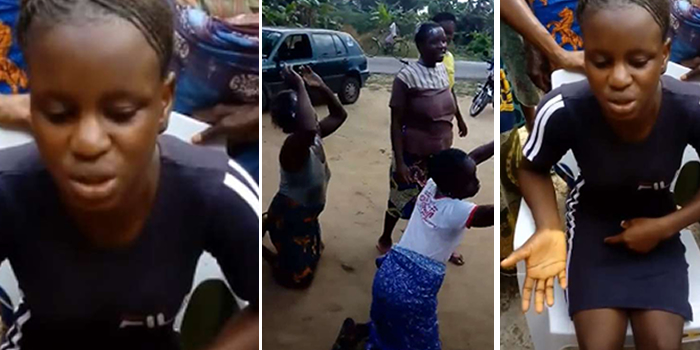 Teenage girl narrates how she was rejected by ritualists

A teenage girl has revealed how she was rejected by ritualist who kidnapped her in Isoko South local government area of Delta state.

There was a massive jubilation as a young girl regained her freedom after being kidnapped by suspected ritualists in Delta.

The young girl who has now regained freedom was kidnapped on her was back from school.

According to her, she stopped a motorcycle on her way home and was told by the bike man that he wanted to go and buy fuel from a petrol station which she agreed to.

The motorcyclist also picked up another man whom he claimed he wanted to help. That was how she was kidnapped and taken into a bush.
The teenage girl said on getting there, she saw two other girls in the ritualists’ camp who were blindfolded.

She claimed after being forced to lie down and was about to be killed with a cutlass, the master allegedly prevented his boys from killing her as he said that her head is not good for sacrifice.

The young girl was blindfolded, taken out of the ritualists’ camp and dumped by the roadside where she met some women who helped her back to her house

Update: Missing 11-year-old girl found disoriented in Lagos; suspected to have been…