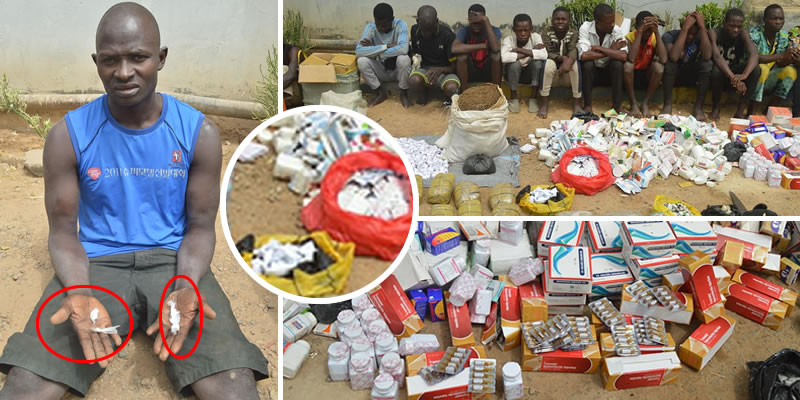 Drugs popularly known as ‘Suck And Die’, many others recovered from dealers in Kano

The drug dealers were paraded by the Kano police command after being arrested over various crimes committed across the state.

On 1st March 2019, the duo of Mujahid Abubakar and Iliya Garba, were arrested at Sabon Gari Market were arrested for dealing in the bulk sale of hard drugs in the Market.

The suspects confessed to the commission of the crime while effort is being intensified to arrest their accomplices and arraign them before the court for prosecution.

On the 28th February 2019, one Muhammed Abdullahi ‘m’ of Hotoro qtrs Kano, a distributor of Cocaine substance was arrested in Hotoro area. 4 wraps of the Cocaine was recovered from him while investigation is in progress.

On 05/03/2019 a raid was conducted at some black spots inside Sabon gari area, 13 suspects were arrested and the following exhibits recovered from them;
a. 12 cartons containing 720 cutlasses
b. 1 bag and 700 wraps of Indian hemp
c. 1 Tricycle
d. 3 packets of rubber solution.

The suspects will be charged to court for prosecution immediately investigation is completed, please.