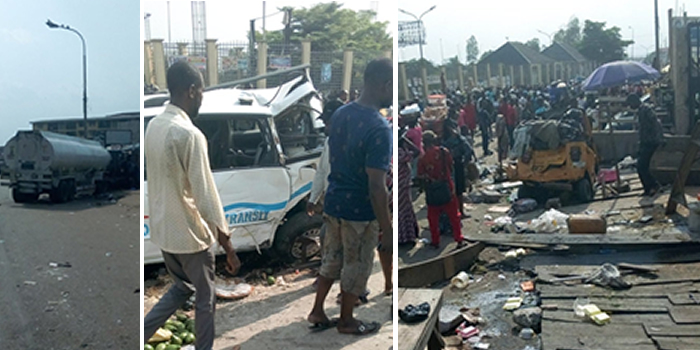 Many feared dead as trailer loses control, rammed into crowd in Anambra (video)

Many people were killed after a trailer rammed into a crowd along Upper Iweka road in Onitsha, Anambra state yesterday March 13th.

According to reports, the tanker suffered a brake failure, lost control and killed people from Toronto hospital to NITEL junction at upper iweka. The victims have been deposited at the Toronto hospital morgue.

See photos and video below as shared by an internet user on Twitter;

"@NnekaRomaine: People are dead ?this life Jesus ?a tanker just failed break at upper iweka onitsha, more than 20 dead before my eyes may their souls RIP? so many people disfigured for life…Chineke Nna ?This unworthy girl is thankful. pic.twitter.com/gufNYM6MKW