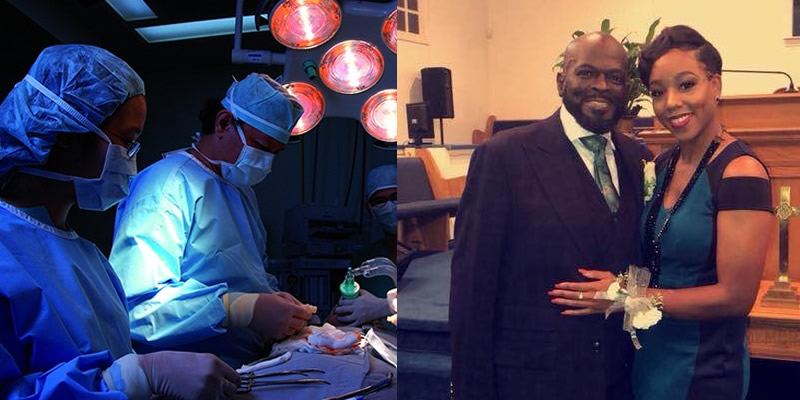 A woman in North Carolina will soon donate her kidney to the man who adopted her 27 years ago, saving his life in a surprising twist of fate.

DeLauren McKnight was surprised to learn she was a match for her father, Billy Houze, as they are not blood-related.

Mr Houze’s kidneys began failing in 2016. Doctors said he would not survive past five years without a transplant.

None of the 64-year-old pastor’s other family members had been a match.

Speaking on Good Morning America on Friday, Mr Houze, a father to five children, said he was “extremely proud” of his daughter.

The Baptist pastor began suffering kidney failure following a gall bladder surgery in 2016. When none of his relatives were donor matches, doctors said it could take him seven years to get a kidney.

‘You are bitter because your butt surgery wasn’t successful’ – Moesha…

Then, in February, they tested Ms McKnight, who Mr Houze and his wife adopted in 1992 – and she was a perfect match.

When Ms McKnight told him the unexpected news, she said her father broke down in tears.

“I call him my Superman,” she told Good Morning America. “There’s nothing in this world I wouldn’t give him so he can enjoy life and be right there beside me.”

Mr Houze and Ms McKnight will be undergoing surgery in the next few weeks.

I’m about to lose everything I’ve worked for, depressed Nigerian filmmaker, Egor Efiok cries out for help

Classmate from 50 years ago donates kidney to sick man