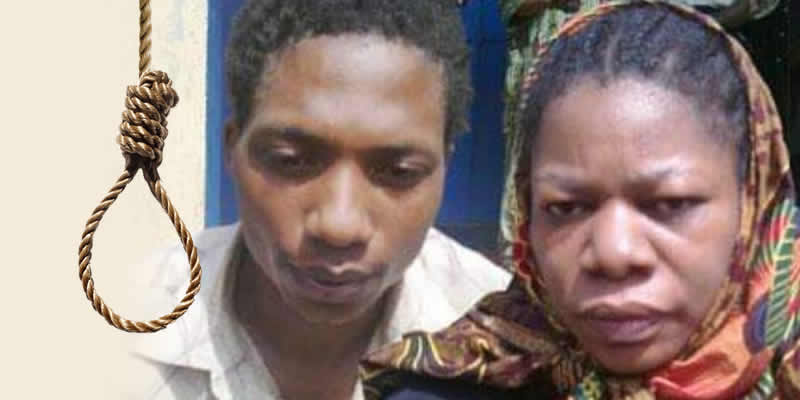 A High Court in Benin on Thursday, sentenced a housewife Eniobong Isonguyo and her pastor lover, Udoka Ukachukwu, to death for the murder of her husband, Engr. Victor Gabriel Isonguyo, a staff of Nigerian National Petroleum Company NNPC, Benin, Edo State in 2013.

During the trial, the prosecuting counsel told Court, that the murder of the deceased was carried out by the convicts so as to cover up the pregnancy accusation by the deceased while he was away.

“The deceased’s wife told the pastor to wait on the route of her husband to work and ask him for a ride. The plan paid off as the man eventually stopped and gave the pastor a ride along sapele road Benin. During the journey, the said pastor brought out a sharp object and hit him on his neck before opening the petrol tank, sipped out fuel and burnt him beyond recognition,”

It was established that millions of naira and landed properties belonging to the deceased were transferred to the said pastor by the wife.

The prosecuting counsel said the woman who was four months pregnant as at the time of the incident, later gave birth in Benin prison.

In his ruling Justice Geraldine Imadegbelo held that the prosecution was able to prove the case beyond reasonable doubt.

COVID-19 kills Pastor who claims he has it’s cure; Followers in…

The Court held that the deceased was killed with a sharp object in his car by the said pastor who then set the car ablaze.

The judge however sentenced them to death by hanging.

The then Commissioner of Police,CP Foluso Adebanjo who narrated how Mrs Enebong Victor Isonguyo planned the murder of her husband with her Pastor lover, Prince Udoka Nkanchukwu, said they both confessed to be lovers and plotted the death of the NPDC staff and father of three. According to him,

“What happened was that the Pastor asked the deceased to meet him somewhere along Sapele road. When the deceased got there, the Pastor stabbed him twice and then burnt the car. The woman gave the husband’s new car to the Pastor and we found the car with the Pastor. After killing the man in his vehicle, he set the car ablaze. The Pastor changed the number plate of the new car and put a fake one after he murdered the man.”

However, Mrs Isonguyo who denied having extra marital affairs with the Pastor, said:

“When I did not see my husband I ran to the Pastor because we have known for a very long time. I took my husband’s new car to him to sow as a seed in the church so that my husband will be found. I told him to take it to the church but I didn’t know that he went and changed the number plates. I had to ask him to pray harder because I loved my husband and I don’t want anything to happen to him. I did not kill my husband because I loved him.”