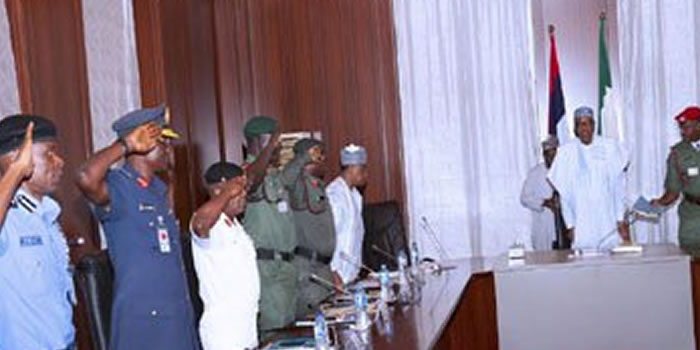 The group warned them against heating up of the polity by those attracting unnecessary attention to the military with propaganda.

NDF was reacting to the report in some quarters, which claimed President Buhari had fired all the security chiefs.

Dr. Bolaji Abdulkadir, Secretary General of NDF in a statement forwarded to our reporter on Saturday, said the claim was a clear indication that the oppositions were not tired on their quest to topple the current government.

The statement reads below.

The National Democratic Front (NDF) is alarmed at the unnecessary attention being directed at the Armed Forces of the Federal Republic of Nigeria in recent day because we believe that such development cannot be good for our democracy. Our reference is specifically to the hoaxes making the rounds about the military service chiefs having been changed, sacked or about to be replaced.

Our decision to express concerns over this development was borne out of several factors. The first is that we observed that the hoax and stories are being published by outlets that have shown a track record of being sympathetic to the opposition or have fully aligned with the opposition in the past. This, for us, is indication that the hoax is part of an elaborate plan that predated the General Elections, which calls for concern knowing the extent of acrimony the opposition had displayed at that time.

The second factor that gives us concern is that this same opposition had been named in a plot to pressure President Muhammadu Buhari to drop the service chiefs so that a new crop of military chiefs that are sympathetic to the opposition will be appointed following which they will overthrow the government and hold a shabby transition to hand over power to the opposition. There is no proof that the opposition has renounced this plot, which means the concocted stories about the Service Chiefs is a pointer to how the plot is being modified in the aftermath of the elections. Already, we are already witnessing series of unwarranted protests that were previously revealed as the excuse that rouge military personnel that have been recruited would use to attempt unseating the government.
We are equally concerned that even if the opposition has no design to overthrow the government, the twentieth anniversary of our transition from military dictatorship to civil rule is not the best time to focus unnecessary attention on the military. Obsessing about the military chiefs and their tenure at a time when there are other pressing issues of national development amounts to saying that some people want the military back in the saddle of leadership or that they are nostalgic about losing the civil rights that many Nigerians died to secure for the country. Such mind-set goes beyond irresponsible and is squarely in the territory of criminality.

We are aware how these same people that are peddling rumours about the sack of military chiefs have been the ones worsening the country’s security breaches. They have coined fancy names for the people they contracted to cause trouble for Nigeria so that the true extent of their complicity will remain hidden. It is no surprise that some of them will always jump up to amplify whatever atrocities have been committed by their rebranded Boko Haram/ISAWP, killer herdsmen, unknown gunmen, killer herdsmen, kidnappers and any other malaise they have decided to afflict the country with.

It has now been revealed that the contacts of these political jobbers in the military have been actively sabotaging ongoing efforts to neutralize the security breaches by leaking information to their political patrons, who in turn pass the information to their hired killers operating under the aforementioned names.

The serial failure of these killer groups to spiral Nigeria into crisis has now made these detractors to turn their attention to the military in the hope of undermining it for that is precisely what will happen if they are able to cast the military in the mould of a political component. This strategy is uncharitable given that our military is undergoing reorganization and professionalization under President Buhari.

It must also be stated that issues of the military leadership, being a matter of national security, should not be reduced to a matter for beer parlour talks, which appears to be the preferred platform for certain politicians to discuss national issues. The dynamics around those that have been doing much to secure the country from growing existential threats cannot be degraded to being placed on the same pedestal as those for contemplating political manoeuvrings and permutations. We therefore see these conjectures and hoaxes being offloaded on Nigerians as an attempt to politicise the military, which we had condemned in the past and will continue to condemn because we know that it runs contrary to the wellbeing of the country.

NDF therefore warns those behind the fake news about change in military leadership to desist from spreading falsehood irrespective of what motivates or incentivize them. The line between what they are doing and executing a coup against the government of the day is very thin. They cross that line and the consequences provided in the law kick in and at that stage being in the opposition, activist or NGO community will not guarantee immunity from tasting the full flavour of the law.

Our warning extends to the agents of these elements in the military services. The reports that some of the military personnel have been contacted to behave in certain ways to compromise the government and the entire country is well known. Anyone caught collaborating with those that want to destroy Nigeria can be rest assured that Nigerians will rally for them to get the stiffest of the punishments prescribed for coup plotters. We cannot be striving to make our country better while others sabotage the rest of us for pecuniary gains, even when they work in the military services.

NDF unequivocally warn the elements behind the latest hoax to keep away from the military and security chiefs as they have made it abundantly clear that the military will remain apolitical. We do not want anything that will degrade Nigeria’s democracy or security, which unfortunately now appears to be the life goal of the opposition.