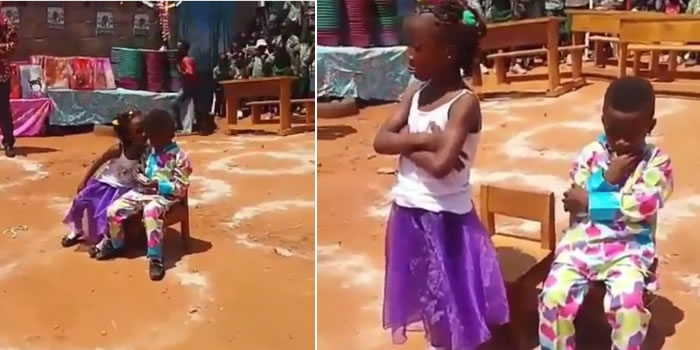 A recent primary school drama has sparks outrage amongst Nigerians after it was first shared on social media. Nigerians expressed displeasures over the video while they took turns in criticizing it.

Slamming the teachers who taught the children to perform something as disturbing and morally inept at such as young age. Children learn very fast, teaching them ‘No Money, No Love’ drama play wasn’t the best thing they should have done.

Here is a video viral drama by primary schoolgirl and schoolboy that has got tongues wagging. The drama has been condemned out-rightly. As many asked that the teachers who allowed children as young to indulge.

The theme of the drama is what many are against. The controversial drama has the following themes:

In the dramatic video acted in school, the girl was standing in anger, obviously, she wanted money but when the boy brought out money, the girls countenance changed, she became happy and excited!! Went to the boy and started showing him, love.

She sat on the Boy’s lap and attempted to kiss the boy who was obviously angry as the boy pushed her away. The acting has got Nigerians blaming their teachers for teaching them such thing at such a young age. But few hailed the kids for their acting prowess and some felt there is nothing wrong with the drama.

Children should be given good drama kids friendly themes to act not something morally bankrupt and wrong such as the one you just saw above. I hope the teachers listen and take heed to the advice given.