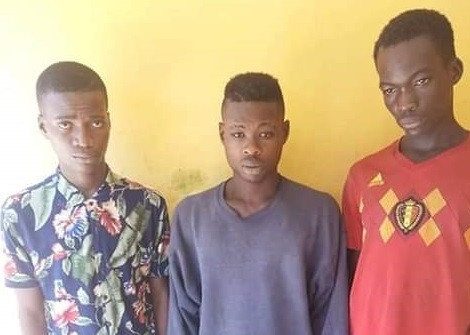 Three cultists arrested for kidnapping and raping teenagers in Anambra

Anambra State Police Command has arrested three suspected cultists for allegedly kidnapping and raping of two teenagers in Awada, a suburb of Onitsha.

Chidiebere Edwin, 19, Chisom Christain and Andrew Ejike, 20, were accused of raping the two teenage girls after taking them through initiation rituals.

Newsmen learnt that the two teenage girls were later set free after being raped and warned to keep the ordeal to themselves.

The Public Relations Officer of the Anambra State, Haruna Mohammed confirmed the awful incident and said to newsmen that the suspects were arrested by Surveillance Patrol team attached to Awada Division.

He said, “The suspects abducted two young girls aged 15 and 17 years and forced them to undergo some initiation rituals and allegedly gang-raped them before letting them go.

“All of them have confessed to their membership of a cult group known as the ‘SAITARIS’.”

The police spokesman also confirmed the arrest of another suspected cultist for allegedly attacking three persons with machete in order to initiate them into his cult group.

He said the suspect, Onyeka Iloka had lured the victims into the bush where they were beaten.

“Suspect allegedly lured one Chidera Agina and two others of the same address into the bush, beat them with machete in order to initiate them into his cult group ‘Vickings confraternity’.

“Suspect voluntarily confessed to the crime and is assisting the Police with useful information that could help arrest his accomplices in order to bring them to justice.”

I underestimated the rot in Imo- Ihedioha