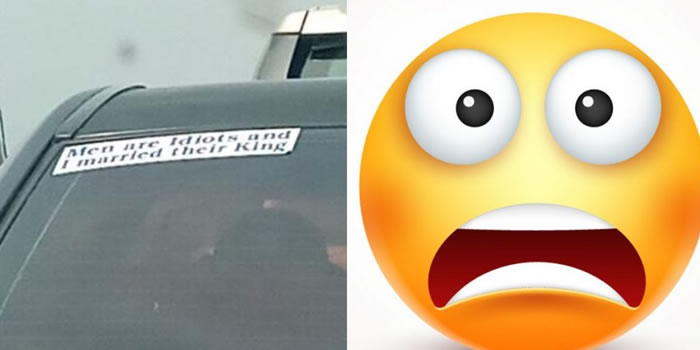 “Men are idiots and I married their king” this is what the sticker on a lady car spotted in Lagos reads.

A social media user shared a picture of a car she drove behind in Lagos traffic and the sticker on the caught her attention.

“Men are idiots and i married their king”

The user posted a picture of the car and sticker with the caption;

If you think you have seen it all in Lagos traffic….i drove at the back of this car today!! 😲😲🤣🤣
@Chydee

If you think you have seen it all in Lagos traffic….i drove at the back of this car today!! 😲😲🤣🤣 @Chydee pic.twitter.com/hnVeJxzeuu

The post has sparked reactions from other Nigerians, see some below.

@RaphaelBlueStar – She has no respect for her husband and it’s the husband’s fault.

@funtoarawomo – Might be a he who saw the sticker and used it just for jokes.
Might even be a single lady.
Might be a lady going through a rough and bitter divorce.
People who are actually married to idiots hardly admit it in public

@coolmontana2 – Plus her father ooo