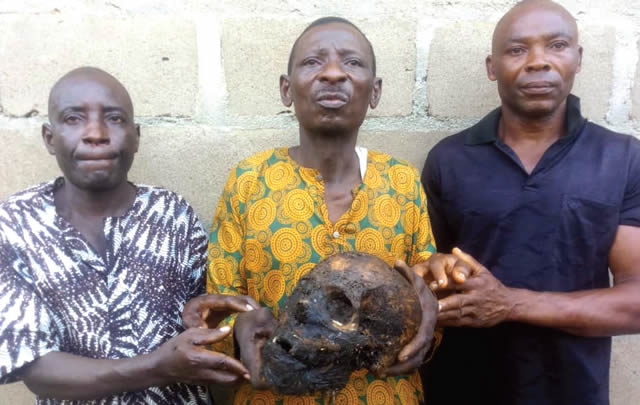 Inspector-General of Police Special Intgelligence Response Team in Lagos has arrested a 65-year-old man, Samuel Olaniyi for attempting to use his late brother’s skull for money ritual.

Newsmen gathered that the suspect who was nabbed alongside with others, identified as Uchenna Olewunna and Sunday Matthew exhumed his late brother’s corpse identified as Jimoh Idowu at Ato area of Ogun state, cut-off his head and was on his way to a native doctor before he was nabbed.

Olaniyi said after his arrest that he was a palm wine tapper and his friend, Mathew, a logger, sold the idea of money ritual to him.

He added that Mathew was in search of quick money and approached Olewunna, who he said was a native doctor that had no idea of how to perform money ritual.

Olaniyi said Olewunna connected Mathew to one of his colleagues at Sango Ota and the native doctor demanded a human skull for the ritual, insisting that the skull must belong to someone familiar to them.

Olaniyi disclosed that Matthew told him about the plan with a promise that if everything went well, the former would take a large part of the share.

Olaniyi stated further that he took Mathew and Olewunna to his late brother’s grave, exhumed the corpse and removed the head.

He revealed that he kept the skull in an uncompleted building for some days and was about to take it to the native doctor, who asked for it when he was arrested.

According to an IRT source, they went into action after gathering the information that Olaniyi had beheaded his brother’s corpse.

The source said the man was traced to Sango Ota where he was arrested alongside Mathew and Olewunna.

While confessing to the crime, 52-year-old Mathew, who hails from the Ipokia area of Ogun State, said, “This is the first time I would be involved in dealing with human parts.

“The three of us went to the gravesite on a motorcycle, Uchenna dug the grave while Samuel held a torch and I was the person looking out for who might be coming to the place.

“After we took the head of the corpse, we gave it to Samuel who kept it in an uncompleted building. We informed the native doctor and he asked us to bring N48,000.

“After raising some of the money, the native doctor asked us to come with the skull and charcoal but while we were on our way, we were arrested by the police.”

In his confession, Olaniyi said he deeply regretted his action.

He said, “It was my friend that got me involved in this mess. I was hoping to become very rich because the native doctor said money would be coming out of the skull regularly.

“It was the native doctor that got us into the problem because he said he would take out of it and all of us would share the rest.”

The suspects, according to the IRT official, will be charged to court as soon as investigation into the matter is concluded.

We went into kidnapping to retaliate our sister’s abduction –Siblings