Mavin records new act, Rema in a tweet this afternoon revealed how Kcee motivated him with a backstage photo 3-years ago in Benin City. According to the rising pop star, the gesture went a long way to motivate him to be great.

“3 years ago I met Kcee backstage in ‘ Benin and I asked for a pic and he gladly accepted, I was really motivated after that pic, it meant alot. Last night I met him backstage and I told him about 3 years ago and he told me how proud he is to see how far I’ve come. Respect LEGEND.”

“God bless you and make you bigger, I know you’re going somewhere the world will see you more.” 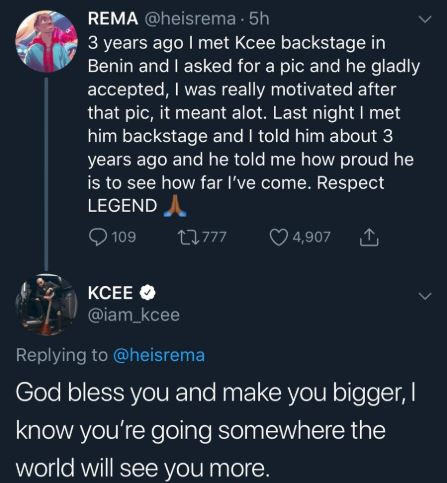 ‘What Wizkid told me about Rema’ – Skales