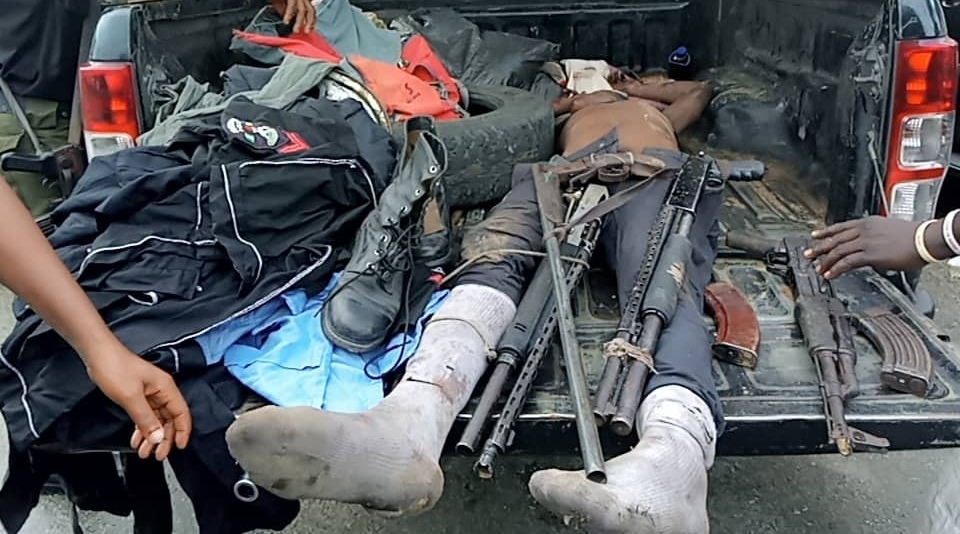 Men of the Rivers State Police Command have killed a notorious armed robber and kidnapper who has been terrorising residents of Rivers State for years during a shootout on Wednesday in Rumuakunde in Emohua Local Government Area of the state.

The spokesperson of the Police in the state, Nnamdi Omoni told newsmen while parading the corpse of the notorious armed robber that Abacha was the leader of an armed robbery gang and has been on the wanted list of the police for a long time.

According to Omoni, arms and ammunition as well as some police uniforms were recovered from gang’s hideout.

‘’The security team in collaboration with local vigilantes, raided a criminal camp at Rumuakunde, Emohua Local Government Area, where a gang terrorising the East-West Road was hibernating. They stormed the camp and on sighting the police, the hoodlums engaged the police officers in a gun battle. In the course of the gunfire, we were able to shoot one dead who was later identified to be Abacha. One of the leaders of the gang identified as Ekwueme ran. One searching the camp, we recovered fire arms allegedly snatched from police officers, three pump actions, two magazines, In that same camp, we recovered police uniforms and berets bearing the tags of the police officers. They wear the police uniforms to carry out their operations. They also have Army apparels. The state Commissioner of police has called for an investigation into how they got the uniforms, whether the officers were killed or there was a compromise”. he said