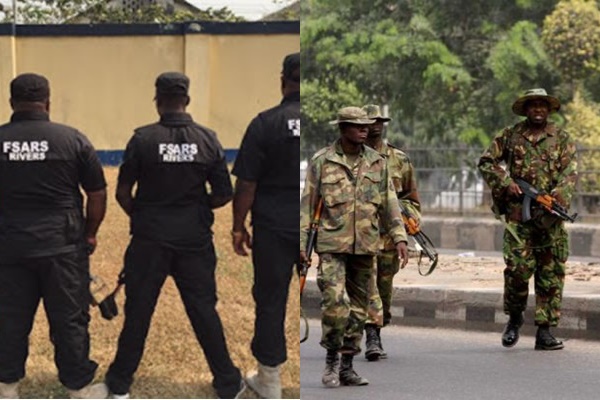 Two sets of yahoo boys engaged the services of soldiers and F-SARS officials on a shady deal they engaged in, the military officers on getting to the scene and hearing the amount of money involved turned against each other in a serious clash in Akure, Ondo State.

Watch the video clip from the scene of the event:

In other news, The face-off between the Nigerian Police and Nigerian Army seems unending due to counter statements released by both bodies on the killing of some residents of Isheri Olofin, a boundary community between Lagos State and Ogun state.

While the Assistant Director of Army Public Relations, Major Clement Abiade claimed a soldier was injured as he denied the involvment of the military in the killing, Ogun State Police spokesperson, Oyeyemi Abimbola said eyewitnesses disclosed that the soldiers dragged a resident from the hospital where he was being treated and stabbed him to death with a bayonet.

According to Punch reports, the killing came off a disagreement during the celebration of the Isheri Day Festival on Monday August 12. Oyeyemi said at least 4 soldiers were involved in the killing and also revealed that efforts to bring the suspected killer(s) to book is already in play.