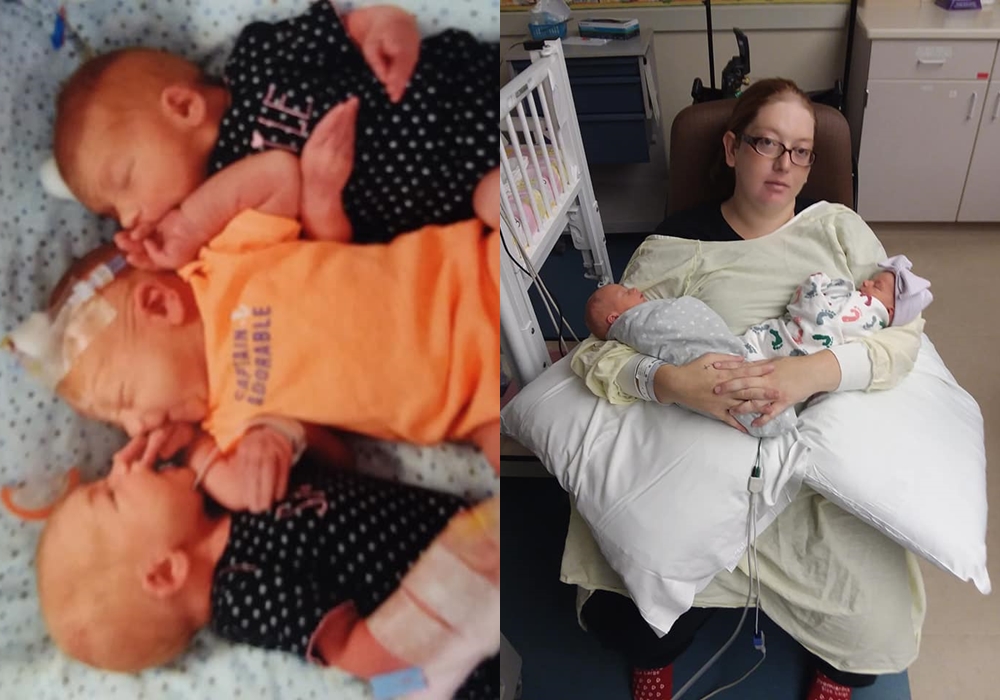 Woman Gives Birth To Triplets After Thinking She Had Kidney Stones

A woman, Dannette Glitz, from Denver, Colorado got the shock of her life after she was told she was pregnant with triplets after she went to the hospital thinking she would be operated on to remove kidney stones.

In a Facebook post, Dannette explained that she was down with serious pains in her back and sides. The woman added that she was in so much pain that she could hardly move or breathe. Dannette was eventually rushed to the hospital where she thought she would undergo surgery for kidney stones seeing as she had suffered from it before.

The doctor then took a urine test and disclosed to Dannette that she is pregnant and expecting twins. It was also discovered that her pains were actually contractions. Dannette was quickly rushed in for a CS operation to deliver her babies when the third child was discovered. Instead of twins, Dannette gave birth to triplets, a son and two daughters.

Speaking with KOTA-TV, Dannette said: “You don’t ever see triplets being conceived naturally, let alone going 34 weeks without knowing. So, everyone’s like I can’t believe it, I’m like we’re still in shock, trust me, we know what you mean like I go to the doctor’s thinking I’ll have surgery for kidney stones and end up going into labor with a c-section that night. It’s crazy”.

Church women spotted lying on the road in Benue, praying against…

Coronavirus: BBNaija’s Uriel confused on decision to save mother from…

Before the birth of her triplets, Dannette already had two kids with her husband of 12 years, Austin Glitz.

Coronavirus: BBNaija’s Uriel confused on decision to save mother from UK

PHOTOS: Proud Corp member shows off mother who sponsored him with proceeds from…