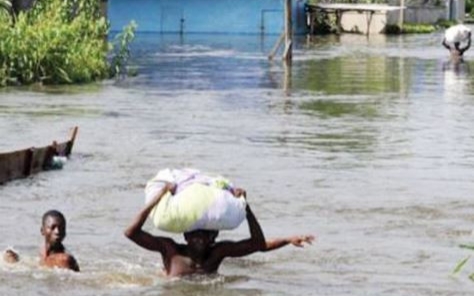 Many people have been displaced in Adamawa state as a result of heavy rain which lasted for hours on Friday, August 23rd as confirmed by the Adamawa State Emergency Agency (ADSEMA).

The Executive Secretary of Adamawa State Emergency Management Agency (ADSEMA) told newsmen that his men are still assessing the damages.

No fewer than 219 people mostly women and kids displaced by flood from Modire and Yolde-Pate suburbs in Yola South Local Government Area had been camped by the agency.

Our officers are also assessing the damage caused by the disaster in Yola North, Girei, Ganye and Shelleng Local Government Areas ” Sulaiman said.

He said from the report reaching the agency, no life had been lost so far, adding, however, that property which included houses, farmlands and domestic animals, among others were affected.

Sulaiman said in some local government areas, the flood had washed away many roads, as well as affected some public schools.

Suleiman urged the Federal Government and other organisations to rescue and come to their aid to avert outbreak of disease in the affected areas.