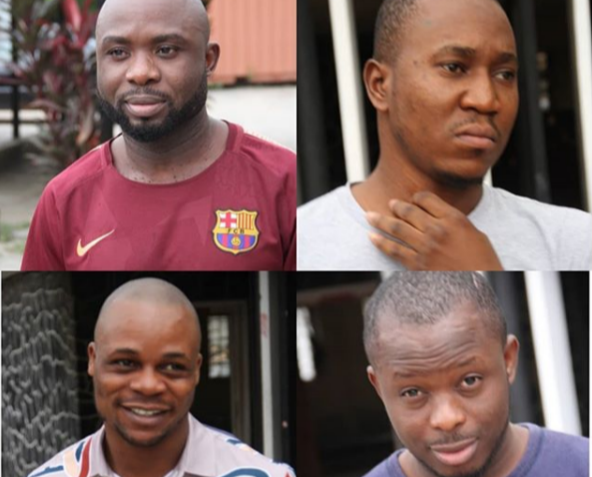 The conviction of four internet fraudsters has been secured by the Economic and Financial Crimes Commission (EFCC) after their arraignment before Justice Hakeem Oshodi of the State High Court sitting in Ikeja, Lagos.

The convicts identified as Adeoye Oriyomi, Onabule Adedokun Kenny, Osei Amankwa Isaac and Shodeinde Oluwatosin were arraigned based on charges bordering on possession of fraudulent documents.

The convicts pleaded guilty to the charges and were sentenced in line with their plea bargain.

In view of their pleas, the prosecution counsel, E.S. Okon informed the court that the convicts willingly entered into a ‘plea bargain agreement’ with the Commission.

The fact of the cases were reviewed wherein the convicts made extra-judicial statements confessing to committing the crimes.

Items recovered from the convicts which include a car, five mobile phones, and four laptops were also highlighted by the prosecutor.

Okon however urged the court to convict and sentence the fraudsters according to the plea bargain agreements entered into by the convicts.

The defence counsels to the convicts, Z.S Makinde and Ikhide Daniels pleaded with the court to temper justice with mercy as they were a first time offender and that they are remorseful about the crime committed.

Justice Oshodi, however convicted the fraudsters but gave them an ‘option of fine’ of N200, 000 (Two Hundred Thousand Naira only) each to the convicts which must be paid within sixty days from the day of judgment.

He further ordered that the EFCC must ensure the service is carried out and must also file and serve the court with a report on the last Friday of every month for the duration of six months.

All items recovered from the convicts were forfeited to the Federal Government of Nigeria.

Justice Oshodi however said in his ruling that the convicts shall be imprisoned for a term of one year if the fine is not paid within sixty days and that the sentencing shall commence from the day of default.

BBNaija: Why I gave Ike immunity – Mercy reveals after the HoH challenge ended in a draw