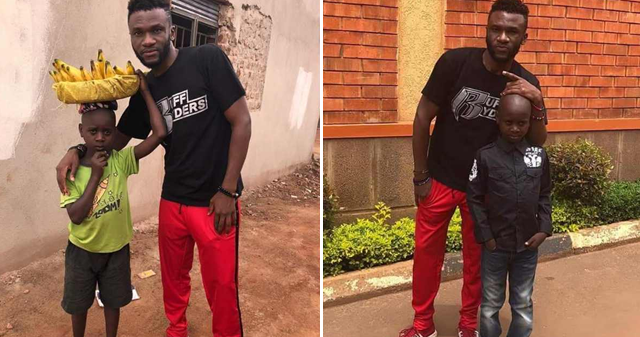 A young man has shared the story of an orphaned 7-year-old banana hawker who got into the trade to be able to raise his tuition fee and how he has now helped change his life.

In a post made on social media, the good samaritan recounted how he met the 7-year-old orphan who started hawking at the age of 5 to raise money for his school fees while he lived with his aunty.

He revealed how he gave the boy, Adam a treat of his life and paid his school fees till 2021. The little boy who couldn’t hold his emotions burst into tears and said, “Today is the best day of my life.”

See the post shared on a group on social media below.

Meet my new friend, his name is Adam. I met this determined hard working boy on Thursday morning at a Washing bay in my area, he had a basket of yellow bananas which he sales for a living, being a little boy that he is I got interested in knowing why he was selling bananas at the age of 7yrs because I had a sense that he is quite young to be doing this. He told me his story:
His mother died when he was 3 months old, after the mother’s death, his father disappeared and abandoned him completely, the family members took him to the village to live with his grandmother, it was at the age of 4 that his grandmother opened up to him about his mother’s passing. When he made 5yrs, the situation became so hard in the village and his Aunty picked him up and brought him to her residence in Ndeeba. The Aunty told him to sale bananas as a source of income to raise money for his school fees, he has to work every single day during the holidays to secure fees for every term. When I saw him yesterday, I gave him 20,000 and told him to go back home and rest b’se he was looking so tired and exhausted. When he reached home he put 5k into his private wooden money tin and handed over 15k to his Aunty as the yield for the day.

Yesterday I told him to come and meet me up today at the same location where we met, he had to get there at 10am this morning but he made it at 8:30am. We have spent the whole day together, took him to town for shopping, had breakfast and lunch together, took him to my place and he showered very well, then went to meet his Aunty at their residence, the Aunty is a tailor and doesn’t gain much from her job and can’t afford the basics of life. I can’t share what she told me about her struggles because it is so emotional and heartbreaking. I have paid his school fees until 2021(I have left the fees with the Aunty). When i was leaving him he said “Today is the best day of my life”. He cried and I too broke down because the moment has been over sentimental and the day has been emotional all through.

Note: This post is not a show off and I know I cant take all the kids off the road b’se this boy is just one out of the many but one day God will see us through.
May God bless you as you too help somebody in your own capacity. Blessings.

BBNaija: ‘It’s about to get crazier’ – Ebuka Obi-Uchendu says as he reveals how the last evictions will be (video)