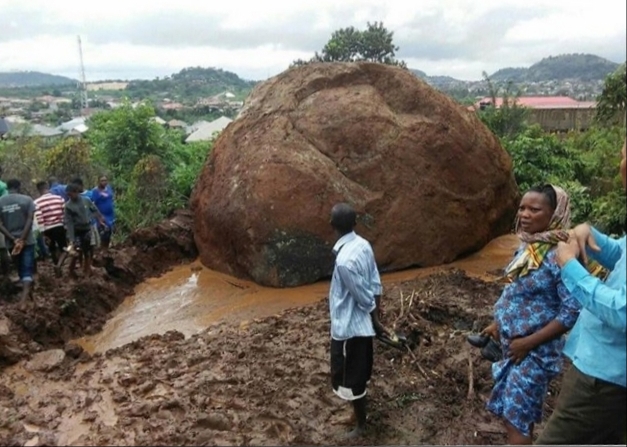 A picture taken at the scene
Metro

Tragedy averted in Ekiti state as rock rolls down a hill

It was a joyous occasion for the people of Ekiti community as a rock rolls down a hill and tragedy was averted in which the incident did not claim any person’s life.

It would have been a song of sorrow for the residents of Moferere street, Ado-Ekiti in Ekiti state if lives were claimed as a rock rolled down a hill in the area but reverse was the case as the people were joyful and happy that no life was lost.

WITHIN NIGERIA learnt that the sad incident happened on Tuesday near a primary school in the community and people have been visiting the place enmasse to see and observe the situation of things which has made the area become a Mecca of sort.

According to reports, the incident happened on Tuesday near a primary school and the area has become a Mecca of sort.

In other news, a twitter user, @ms_jolena has taken to the microblogging platform to announce that a lecturer of the Ahmadu Bello University(ABU), A.B Umar, who was sacked over allegations for sex for grades has been employed by another university.

According to ms_jolena, the lecturer has now been employed by Kaduna State University, about 70 kilometres away from ABU, Zaria in Kaduna state.