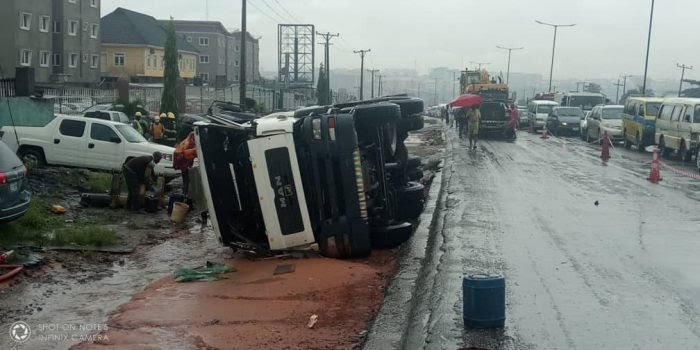 A major disaster was averted on Saturday when a truck fully loaded with petrol fell on Otedola Bridge inward Berger area of Lagos, Southwest Nigeria, it was a lone accident involving a truck loaded with 45,000 litres of petrol.

WITHIN NIGERIA  recalls  that the Otedola bridge is notorious for accidents involving huge traffic.

How the mishap happened is still unknown, but torrential rain hit the nation’s commercial hub for hours starting early morning.

“Earlier today, a truck fully loaded with 45,000 litres Petrol fell at the Otedola bridge. All emergency responders have been activated. Transloading of content is on-going to prevent truck from exploding”, it tweeted.

He said all emergency responders were activated and that transloading of content was ongoing.

The Lagos State Government also assured that efforts were on to keep the area and members of the public safe.