The rumour that the former governor of Lagos state and national leader of the ruling All Progressives Congress (APC) Senator Bola Tinubu, is planning to succeed President Muhammadu Buhari, come 2023, is becoming real as his supporters opened a campaign office in Osun state.

Though, Tinubu has not officially declared intention, neither does he make his intention known in any public function.

The Osun state office for the campaign has been opened in Osogbo, the state capital and his billboard has been mounted on the secretariat. 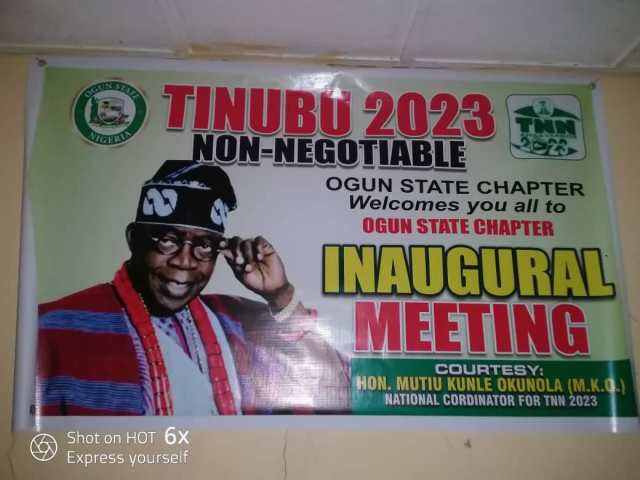 The office was used as the campaign office of immediate past speaker of the state house of assembly, Hon. Najeem Salaam during the governorship race last year.

Posters of the former speaker have been removed since he stepped down for the incumbent governor, Mr. Gboyega Oyetola.

The office is located almost directly opposite Oranmiyan house, the campaign office if immediate past governor, Mr Rauf Aregbesola, along Gbongan-Ibadan road, Osogbo. The billboard was sponsored by one Hon Mutiu Kunle Okunola.

Recall that the rumour first started sometime in April where  Asiwaju Bola Tinubu, opened up on insinuation about his 2023 Presidential ambition.

He described as ‘senseless’ reports that he is propping up Femi Gbajabiamila, a Lagos lawmaker, to emerge as the Speaker of House of Representatives as part of his plans to run for the presidency in 2023.

Tinubu, in a statement issued by his media office sometime in April, stated that his support for Ahmed Lawan and Gbajabiamila was aimed at helping President Buhari succeed in the “shared vision of a flourishing economy and a prosperous people,” in his second term.
According to the statement,

“We have monitored, with rising incredulity, the rash of news stories claiming Asiwaju Tinubu is manipulating the APC nomination process for the national assembly leadership,” the statement read.