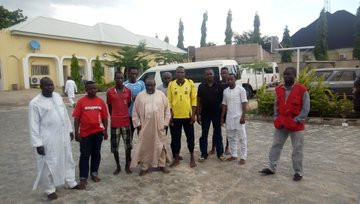 No fewer than 26 suspects have been arrested by the Economic and Financial Crimes Commission (EFCC) for allegedly producing adulterated palm oil by mixing some quality of palm oil with unknown substances and selling same to the public as genuine palm oil in the Gombe main market.

While handling the suspects to NAFDAC, Gombe State coordinator who was represented by Laras Jatau on Friday, EFCC Gombe Zonal Head, Micheal Wetkas disclosed that the arrest was a product of intelligence report received by the anti-graft agencyanti-graft agency which was worked on.

According to reports, the suspects were apprehended with some in the process of mixing palm oil with the said substances. A total of 33 shops were sealed during the operation and are now under lock and key.

PHOTOS: Customs seize N5b worth of banned tramadol in Lagos