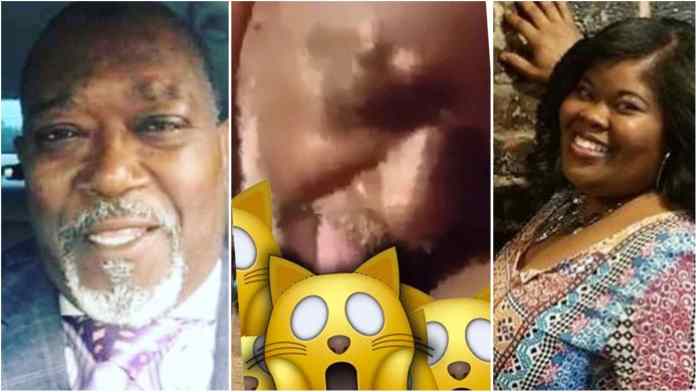 On October 16, a viral video purporting to show pastor E Wilson of BibleWay Ministries & World Out Reach, Inc devour eating from a woman’s honey pot was spread on social media.

The video sparked immense controversy as Wilson is believed to be married. Many social media users have slammed the popular preacher for such shameful and disgraceful act ever since the video broke out.

After days of research, it appears the detectives on on social media have done their job and the woman in the video has been allegedly — and we stress, allegedly — identified.

Shockingly, the lady is the daughter of Pastor Wilson’s wife’s best friend. She has been identified as, Corinthia Edwards. The screenshot of the Facebook profile appears to match the private profile of the same name on Facebook.

Reports have revealed Corinthia Edwards and Pastor Wilson have been dating for a while and it was Corinthia who allegedly shot the video.

In exchange for the affair, Corinthia was promised a leader in the church choir by Pastor Wilson, according to report sighted on Ghpage.com, However, Pastor Wilson reneged on his promise to Corinthia Edwards.

This was what pissed her off forcing her to release the video of Pastor Wilson together with her online. In one of her post on social media after she was given the hɛad of her life, Corinthia Edwards wrote on her timeline:

“You’d be smiling like this too if Pastor Williams wrote the Lord’s Prayer in calligraphy on your south mouth with his tongue.”

Okada Ban: Sanwo-Olu reacts to viral video of his speech at ‘The…