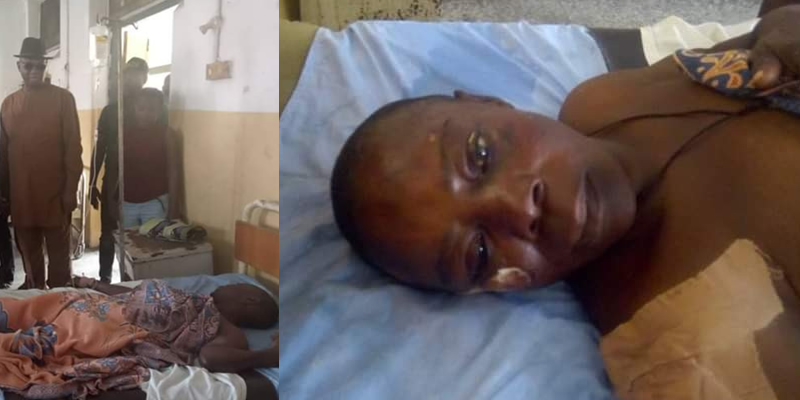 The elderly woman is currently in critical condition at the Sapele Central Hospital, Delta after she was rushed to the said hospital immediately after the accident by a good Samaritan.

This was revealed by a facebook user, Tega Ezekiel Ughara who uploaded the photos on Monday and appealed to the public to assist in identifying the victim.

“ATTENTION! ATTENTION!! ATTENTION!!!
An old woman is lying unconscious at the Sapele Central Hospital, she was knocked down by a hit-and-run vehicle along Ogorode road by Lexi junction on Friday and was rushed to the hospital by a good Samaritan, one Mr. Bojo Sagay. We are calling on the General public to please help us identify her by face on the pictures attached to this notice. If identified, please kindly go to the Amenity Ward of the hospital to reunite her with her family.
All thanks to God, the Almighty for using Hon. (High Chief) Felix Uruemuesiri Anirah who Mr. Sagay called and he immediately went there to pay the bills and is still taking care of everything about her till this moment. We are only calling on the family to come and identify and take her home as all bills will be borne by Hon. (High Chief) Felix Uruemuesiri Anirah”

In other news, no fewer than five people have reportedly lost their lives in a fatal motor accident in Ondo community.

The fatal motor accident occured at Awoyaya KM 17 Ife garage, Ondo town where five dead and three others were seriously injured in the auto crash.