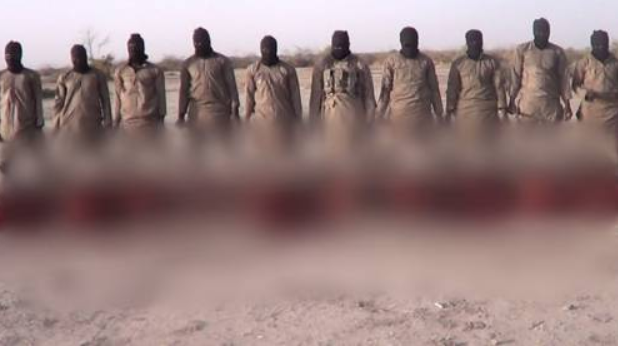 A video depicting the killing of 11 Christians in Nigeria to avenge the death of Abu Bakr Al-Baghdadi who was killed in October during a US raid in Syria has been released by the Islamic State Group in Nigeria.

According to Ahmad Salkida, a conflict and terrorism reporter in Nigeria, the Christian victims were seen appealing to President Muhammadu Buhari’s administration to negotiate their release in the video released by the Islamic State West Africa Province.

No details were given about the victims, who were all male, but IS says they were “captured in the past weeks” in Nigeria’s north-eastern Borno State.

IS “news agency” Amaq produced the 56-second video but it was released on December 26 which analysts say the timing coincided with Christmas celebrations.

According to reports, the killing was filmed in an unidentified outdoor area. One captive in the middle was shot dead while the other 10 were pushed to the ground and beheaded.

“We killed them as revenge for the killings of our leaders including Abubakar al-Baghdadi and Abul-Hasan Al-Muhajir in Iraq and Syria.”, the terrorist group claimed.

Boko Haram/ISWAP: CALSER writes US Ambassador to Nigeria over…

While reacting to the rude and sad development, President Muhammadu Buhari has condemned the apparent killings and urged Nigerians not to let themselves be divided along religious lines.

“We should, under no circumstance, let the terrorists divide us by turning Christians against Muslims because these barbaric killers don’t represent Islam and millions of other law-abiding Muslims around the world,” he said in a statement.

He did not mention the identity of the victims.