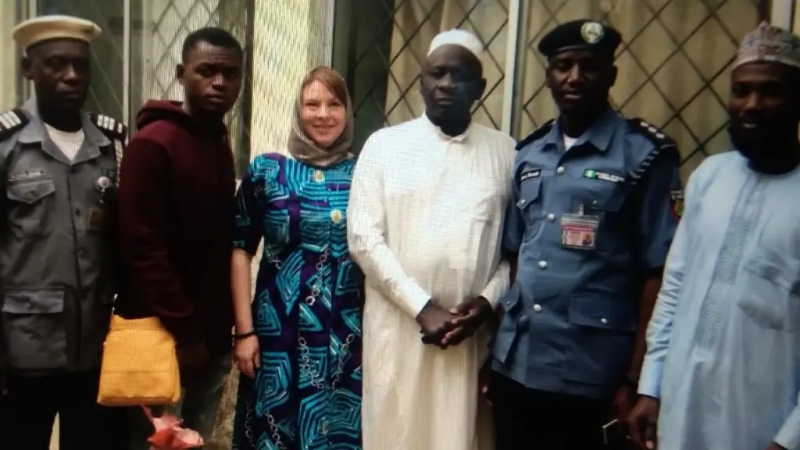 American woman identified as Janine Sanchez and her Kano-based lover, Isah Sulaiman were invited by Kano State Sharia Police known as Hisbah for a meeting at their Panshekara Office.

WITHIN NIGERIA learnt that the American woman identified as Janine met her lover on Instagram and decided to trace him to Nigeria all the way from America to marry him.

It was further learnt that the meeting which had in attendance of Isah’s father, Suleiman and his brother was held in a close door.

As at the time of reportage, the outcome of the meeting is unknown but the intending couple were reportedly sitting comfortably while the Hisbah officers introduce themselves.

The State Headquarters of the Hisbah Board along Sharada road was also visited by the social media lovers.

Reacting to the development while answering questions from journalists at his residence in Panshekara, Alhaji Suleiman disclosed that he would accord his son all the necessary support he desires to ensure his smooth take off to the United States and successful wedding with the fourty-six year old American.

Female kidnapper rearrested in Kano after escaping from hospital she…

Isah’s father further revealed that security agents such as Department of State Security (DSS) amongst others will be involved in the matter.

Isah and Janine are planning on getting married in March after months of courtship on social media.

Female kidnapper rearrested in Kano after escaping from hospital she…