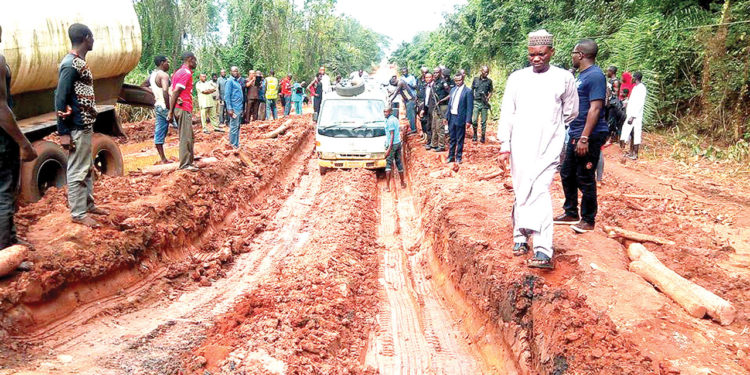 The deplorable state of Ureje Bridge connecting Ado-Ekiti to Abuja, and Ikare-Akoko in Ondo State has been decried by the residents of Ureje in Ado-Ekiti, the capital of Ekiti state.

The perceived abandonment of the Ado/Omuo/Kabba/Abuja road project which has been in a sorry and deplorable state.

It was learnt that the Minister of Works Babatunde Fashola assured the people and vowed that the project would be attended to before the rainy season.

The bridge collapsed last year due to persistent flooding. Government put up palliative measures to make it motorable.

Some residents said the road had become a death trap.

“We are worried that what happened last year will repeat itself on this bridge. Four months after the flooding which affected many homes, property, with people dying, nothing has been done.

How I was scammed by a ‘Yahoo boy’ – Babatunde…

‘’We expected reconstruction work to be at the completion stage rather than the government telling us it has just got approval for reconstruction,” a resident said.

Chairman of the House of Representatives Committee on Federal Road Maintenance Agency (FERMA) Femi Bamisile said he had advised the Federal Government to tackle the ecological problem around the bridge before embarking on its reconstruction.

Bamisile, representing Ekiti South II, said the contractor lacked the capacity to undertake such project. He urged the minister to look into that aspect to prevent a shoddy job.

He said: “The flood that has persisted on the bridge will continue if it is reconstructed without tackling the ecological problem in the area. The source of the water must be controlled properly for the job to be well done.

“As chairman of FERMA committee, and member of the Ecological Fund Committee, I have met with the Permanent Secretary, Ecological Fund, Dr. Lawal Abibat, and she promised to work on ecological fund due for Ekiti this January.

“I let her realise that Ekiti has not benefited from the Ecological Fund in the last six years. But with the coming of Governor Kayode Fayemi, ecological fund worth over N700 million will be released for Oye and Aramoko-Ekiti, while Ureje will also benefit”

There will be no fuel scarcity during Christmas – NNPC