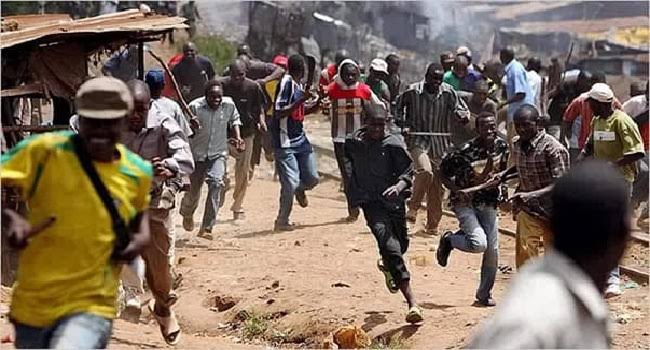 This was confirmed by the Police Public Relations in the state, Bala Elkana while speaking to NAN.

Elkana disclosed that the fight was between KK and Eiye Confraternities. The command has arrested 10 suspects, he added.

Elkana further revealed that the fracas started after an argument ensued between two members of the groups. One of them was stabbed. The group, whose member was stabbed, launched a reprisal on the other group.

While reacting on the incident, Elkana added that the Commissioner of Police, Hakeem Odumosu, called an emergency meeting and summoned the Area Commander, DPOs, tactical commanders where the incident happened, and others to arrest miscreants and deal with the situation.

Reacting to the incident, the Chairman of Ijede Local Council Development Area Fatiu Salisu said the clash started on January 20 when a man was reportedly stabbed with a bottle and was rushed to the General Hospital.

According to Salisu, the man was rejected due to the nature of his injuries and was later referred to a teaching hospital. Salisu added that his members thought he had died and so launched a reprisal.

He said: “I was at a meeting in Ikeja when I was called that a boy, belonging to ‘Eiye Fraternity’ had been stabbed. I met the body at the roundabout. On that day, two people died, another four were killed the next day while another one was killed today (yesterday), making seven in all.”

Secretary to the Ijede monarch Chief Babatunde Ogunmuyiwa said the fight started on January 20 when some boys from Ipakan and Egbin were in a fracas and one of them was stabbed with a bottle.

Ogunmuyiwa said the boy was rushed to the hospital but some of his members spread rumours that he was dead, which led to the fracas.

“After investigations, we realised it was a rivalry clash between fraternities. We called an emergency meeting and it was resolved that we should appease the gods. The community has been peaceful since most of the boys renounced their membership until this moment,” he said.