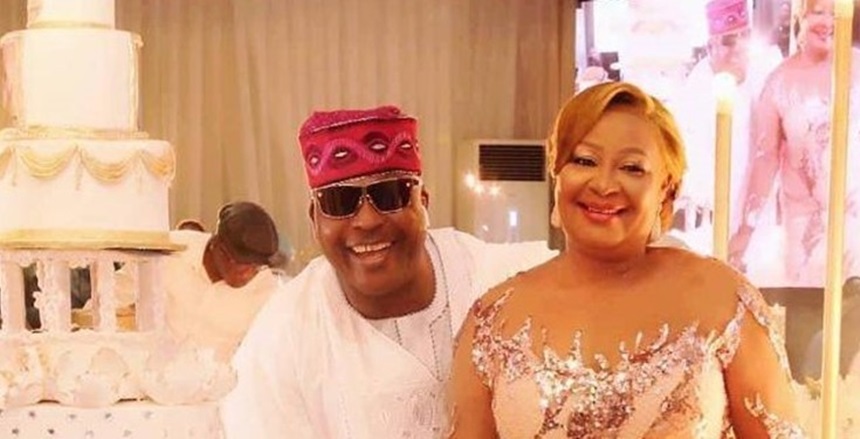 Ace afro juju musician, Sir Shina Peters’ wife Sammie who recently clocked 60 has disclosed in an interview that she would rather share her husband with a side chic, rather than lose him to another woman.

Sammie Peter’s who celebrated her 60th birthday party penultimate week in Lagos amidst pomp and pageantry, opened up on her almost-40-year-old union with the handsome musician who will soon be 62 years old.

Speaking exclusively to Kemi Ashefon during an interview at their Lagos home, Sammie Peters revealed that their marriage had been intact despite all odds because she decided to understand what makes her kind of marriage work.

“I’m married to a musician and I knew from the beginning that women don’t allow musicians to rest. The journey of marriage has been hectic, beautiful, challenging but never rocky. I’ve never thought of divorce in the union and neither has my husband.

Even with some concubines lurking around her handsome husband?

She said, “That has not affected my marriage. I’d always said and believed that I’d rather share my husband than lose him to any other woman. That has always been my stance even as a young wife. This is not to encourage my husband or other husbands out there to cheat on their wives, but I adopted that attitude to stay happy and not develop high blood pressure. What I cannot change, I pray to God and He answers me.

If you are a side chic dating a married man, you better be cashing…

“Nothing my husband does affects me. My love for him is unconditional and nothing can separate me from my husband. I understand him perfectly, we love each other and he has always respected me. He has never brought another woman to our matrimonial home. I love my husband, I would always love him and I don’t think the love will reduce no matter what happens to us.”

Still talking in glowing terms about her husband, Sammie Peters recalled how she met him.

She said, “I met Sir Shina Peters when I was 21. Our parents were close and at a stage they claimed we were related. But we are not—we are just from the same town. We have been together all these years.”

Sammie advised women on the best approach to living happily in a marriage without suffering from high blood pressure.

“When going into marriage, ask God for patience. Respect your husband even when he has done something wrong. Let him have his food and don’t shout on him. Give room for dialogue and allow him to tell lies even when you know he is a liar.

“Moreover, if you can just look away and know that men are natural cheats, you would be at peace and pray to God to make your husband respect you and the home. Even if he’s cheating, pray that he doesn’t embarrass you and he should be respectful about those affairs.”

She didn’t spare side chics either. “Women are women’s problems. Side chics are heartless and would be dating a married man. You break another woman’s home just because of money. Don’t make another woman cry. Leave their husbands alone,” she said.