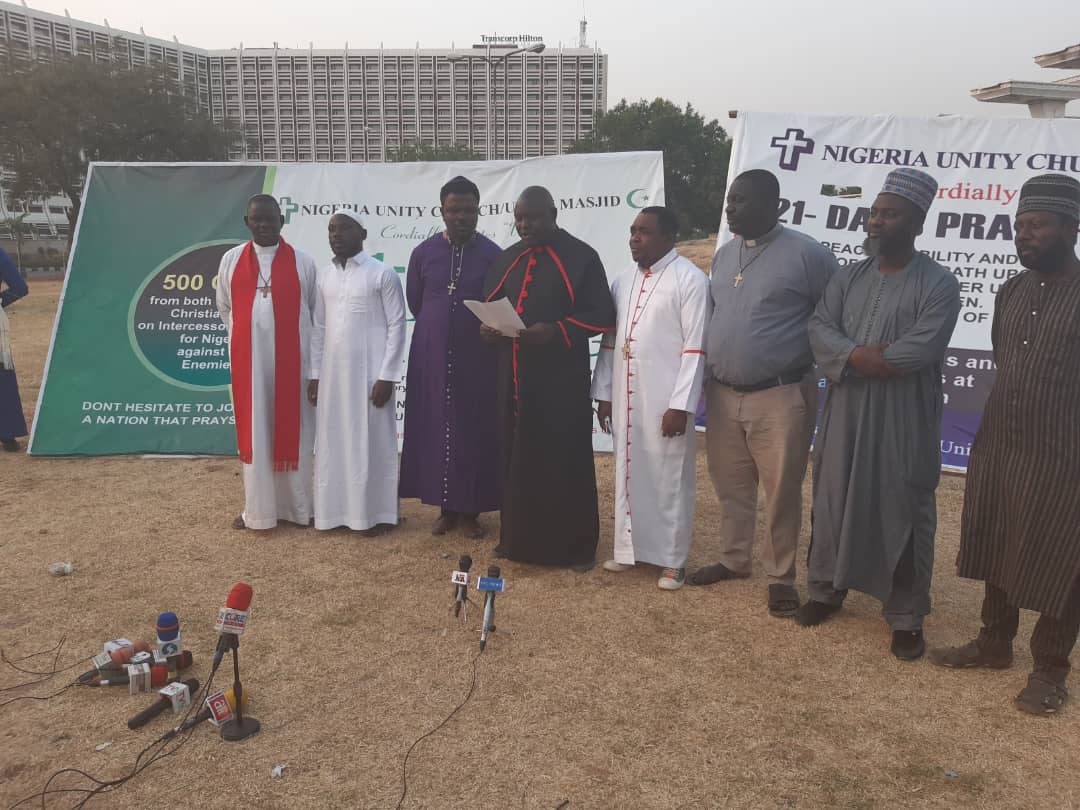 In a bid to defeat Boko Haram ideology while also canvassing support for the Nigerian military, an inter-faith group is embarking on love campaigns to churches and mosques across the country.

The National Inter-Faith and Religious Organizations for Peace (NIFROP) made this known at the end of a 21-day prayer and fast for the unity and peace of Nigeria at the Unity Fountain, Abuja.

In a communique co-signed by Bishop Prince J Madaki, Bishop Lawrence Ngene, Sheik Ahmad Jiddah Umar and Sheik Ja,afaru Kantoma, the group said this direction is divine and must be strictly adhered to.

According to the clerics, the campaign is geared towards frustrating the agents of destabilization using Boko Haram to cause a religious war in the country.

The group further revealed that these terrorists have nothing to do with Christianity or Islam, hence Nigerians must enlightened.

NIFROP, however, advised every cleric in the country to join the campaign, going all out to preach the gospel of love and unity of Nigeria.

Amnesty International, lawyers should be ashamed for failing to prove…

The National Inter-Faith and Religious Organization for Peace is an organization comprising of Christian and Muslim faithful that have elected to come together under one umbrella to pray and intercede for the common good of Nigeria.

The National Inter-Faith and Religious Organizations for Peace since inception several years ago has been in the vanguard of preaching peaceful coexistence in Nigeria, and this much has seen to the convocation of seminars and religious programmes that have brought adherents of different religions in the country under one roof and one voice for the peace and unity of Nigeria.

The resurgence of the activities of the Boko Haram group in Borno state elicited concern from critical stakeholders, and this saw to the organization of a 21-day prayer and fasting programme by the National Inter-Faith and Religious Organizations for Peace for Gods intervention in making Nigerian a united and peaceful country in an atmosphere of love and tranquility.

During the 21 day prayer and fasting programme religious faithful prayed and fasted fervently for God’s intervention in the crisis in North-East Nigeria and especially Borno State that has witnessed a resurgence of the activities of the Boko Haram terrorist group.

That the efforts of President Muhammadu Buhari have seen to the defeat Boko Haram and the recent acts of insecurity in Borno State is being politically motivated by enemies of the country.

At the end of the 21-day prayers and fasting programme the clerics in unity herby make the following declarations:

That the recent activities of bandits and kidnappers in some parts of the north are the handiwork of evil men and women and desperate politicians who find it difficult to give up their inordinate ambitions after a convincing loss at the polls.

That the recent calls for the sack of the hardworking and patriotic Service Chiefs in the country are the handiwork of coup plotters and politicians desperate to destabilize the administration of President Muhammadu Buhari due to his stance on leading Nigeria with the fear of God.

That those that have looted the commonwealth of Nigeria in times past are angry to reverse the gains made in the war against insurgency so that they can gain control of the country through the back door.

The National Inter-Faith and Religious Organizations for Peace as a result of the forgoing at this moment make the following resolutions:

That every cleric in Nigeria should go all out to preach the gospel of love and unity of Nigeria, as stated in the book of Romans 8:35-39 “Who shall separate us from the love of Christ? Shall trouble or hardship or persecution or famine or nakedness or danger or sword? As it is written: “For your sake, we face death all day long; we are considered as sheep to be slaughtered.” No, in all these things we are more than conquerors through him who loved us. For I am convinced that neither death nor life, neither angels nor demons, neither the present nor the future, nor any powers, neither height nor depth, nor anything else in all creation, will be able to separate us from the love of God that is in Christ Jesus our Lord.

That the Pastors and Imams who attended the 21 days of fasting and prayers should make it a duty to pray every Friday and Sunday for President Muhammadu Buhari and his cabinet to lead the nation without fear and the wisdom of God as stated in the book of Luke Chapter 1vs 50. “AND HIS MERCY IS UPON GENERATION AFTER GENERATION TOWARD THOSE WHO FEAR HIM.” And in Chapter 9 vs. 19 in the Holy Koran, “Have you made the providing of water for the pilgrim and the maintenance of al-Masjid al-Haram equal to the deeds of one who believes in Allah and the Last Day and strives in the cause of Allah? They are not equal in the sight of Allah. And Allah does not guide the wrongdoing people.”

That all Clerics in Nigeria should continue to pray for the leadership of the Nigerian military and other security agencies defending the nation from terrorists and their sponsors as exemplified in the book of 1 Timothy 2:1-2 – “I urge, then, first of all, that petitions, prayers, intercession, and thanksgiving be made for all people— for kings and all those in authority, that we may live peaceful and quiet lives in all godliness and holiness.”

The under listed conclusion were reached:

That Christian’s and Muslim faithful should embark on a campaign against the agents of destabilization using Boko Haram or any other group’s action to cause a religious war in the country.

That a strong message should be sent out to all and sundry that Boko Haram, kidnappers, bandits, and all terrorists’ criminal groups have nothing to do with Christianity or Islam and should be ignored.

That the love of God and the love of our neighbors should continue to guide and lead us to the path of righteousness.

That a state of emergency should be declared in Borno State and any other state in Nigeria whose political leadership compromises its responsibility in providing security for the citizens.

That the leadership of the National Inter-Faith and Religious Organizations for Peace pleads with President Muhammadu Buhari as a father to forgive Governor Babagana Zullum and every other person responsible for the ugly incident in Borno State because to err is human but to forgive is divine.

Amnesty International, lawyers should be ashamed for failing to prove allegations…

Senate under fire over bill to give ‘repentant terrorists’ foreign education