“You cannot fast your way into your prosperity”, Bishop David Oyedepo says

According to Oyedepo, one cannot fast his/her way into prosperity but rather by feeding (studying) on the word of God. He urged those who spend their days fasting in the hope of becoming rich, that such a thing cannot happen.

“You cannot fast your way into your prosperity, you feed into it through the Word of God”, he tweeted. 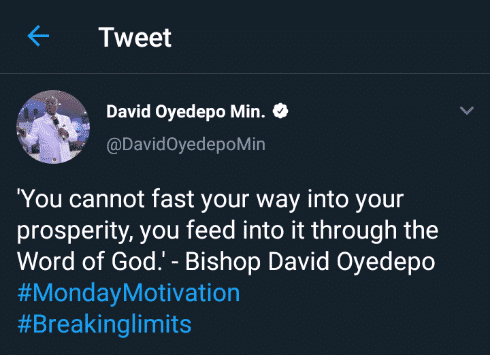 In another post, Oyedepo stated that one can be a Christian and still be in lack. This he says is because the person is failing to see what God is saying.

In other news, the G.O of the Redeem Christian Church of God, Pastor E.A Adeboye clocked 78 today. Taking to his social media page the cleric thanked God for adding another year.