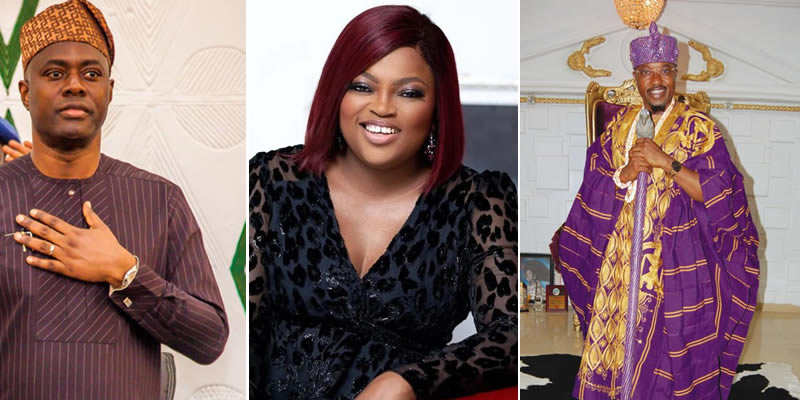 Funke Akindele, Oluwo of Iwo, Seyi Makinde and other ‘clowns of Covid-19’

Nigerians are the strongest citizens in the world. The level of adaption to every situation is alarming and quite encouraging. There’s no situation Nigerians can not easily adapt in. The story of Covid-19 in Nigeria is very different from the tales of Covid-19 in other countries of the world.

The same covid-19 that killed thousands in other countries, ruined their healthcare systems and made their excellent administrators shivered came into Nigeria in a least unexpected way, besides the encouraging rate of recovery, how positive cases of the rich and elite suddenly turn to negative after some days are nothing but surprises.

To the world, Covid-19 is a deadly disease, killing thousands but to us in Nigeria, Covid-19 is a whistle blower. The disease has exposed the rottness in our system, revealing how selfish and despotic some of our politicians could be and most importantly how lowly in intelligence people we so much rated high by their professions or certain positions they hold could be.

In the time of election and gladness, every politician, celebrity and elite vowed to stand with the poor especially politicians who promised the poor heaven and earth but now we know politicians/rich who did their best and those who did nothing.

We are now in a season of camera boys following donors in the name of philanthropy and printed faces of most donors nearly have weight than items distributed. Many politicians got to power, filled their pockets with public funds but fail to remember people who elected them nor retribution (Karma). For Nigerians, Covid-19 is a sad story of hunger.

Truly, many incidents have accompanied the outbreak of Covid-19 in Nigeria. Besides the palliatives story and how a particular state allegedly staged a poorly scripted play “Covid-19” to have access to grants, recent acts of three characters propelled me to write this piece; Oluwo of Iwo, Oba Abdulrasheed Akanbi; Nollywood Actress, Funke Akindele and Governor of Oyo State, Engr. Seyi Makinde.

Funke Akindele, Mercy Aigbe reacts to the brutal murder of Tina and…

THE IGNORANCE OF OLUWO OF IWOLAND

Few days ago, I received a video via whatsapp from a friend. I downloaded the video and almost concluded that it was a comedy kit but a closer look at the character in the video, I discovered that the character is a true king, the Oluwo of Iwo; Oba Abdulrasheed Akanbi. Ha! Kabiyesi ke? I asked. Oba Abdulrasheed can be seen in the video soliciting for mankind and asking God that the virus should attack him so that the world would be free.

What a good king I concluded like an illiterate after watching the video. I would have ignored the video if it was made by a king in his eighties or probably the traditional ruler of my village but I felt so disappointed that the character in the video is a young adult. Oba Akanbi is an educated fellow and he’s well exposed. He was a coordinator of caregivers in Canada before he ascended the throne and reportedly recieved an award from the Prime Minister of Canada as a caregiver. Why would an individual of such pedigree concludes that Coronavirus is an evil spirit despite his versatility, education and exposure?

Apart from being a second citizen of Canada where different palliatives have been handed over to the citizens, reduction in taxes and rents, the Prime Minister of Canada who handed over award to him has never failed in his duty of seeing to the proper welfare of his people. Oluwo of Iwo is a traditional ruler of an ancient town in a state where citizens live under fear, hunger and wild poverty while the government watches carelessly. Why would Oluwo of Iwo closed down his palace and announced that only essential visitors are allowed to enter his palace over fear of Covid-19? This same king once distributed buckets for handwashing and appealed that residents of Iwo should not come to the palace. Why did he wake up one day and called on covid-19 to come and attack him when he’s already in isolation? I do not want to share the sentiments of his embattled wife who recently left his palace. I really want to believe Oluwo of Iwo that his embattled wife lied about his personality.

Some days ago, the Executive Governor of Oyo state, Engr. Seyi Makinde reportedly disclosed that his administration has spent the sum of 1 billion naira to tackle Coronavirus in the state. Members of the opposition and some residents of the state have accused the young governor of mismanagement and diversion of public funds. “The only isolation centre in Oyo state was built during Ajimobi’s regime eventhough the centre has been renamed by the new administration. They just furnished the centre and extended its capacity. So what exactly did they use the 1 billion naira for? A rather sad resident of the state asked.

I laughed when I read the comment on social media. I could not leave the page without explaining how such fund could be properly well spent without any infrastructure in place. The administration of Governor Seyi Makinde simply did not forget the owners of the world, the mothers of the earth. They have carried big sacrifice to wade-off the virus to nearby states and such sacrifice requires a lot of money. Sacrifices in every roundabout and consoling items have been handed over to the controller of Coronavirus spirit so that Oyo state and most especially Ibadan will not record any casualty. Big cows, large sheeps, big kolanuts and others. You will also notice that public fights have reduced because people don’t hack themselves again. Go and ask Road safety the last time they recorded accidents, they would tell you that they’ve not recorded any since the emergence of covid-19. How UCH CMD, prominent residents of Oyo state and the Governor tested negative within days of being certified positive are results of the sacrifice? That Osun state is battling with the virus despite the lockdown while Oyo state has not recorded large numbers inspite the freedom citizens enjoy during the pandemic says it all that the 1 billion naira spent on religious centres is never a waste as opined by ignorants. I appeal to Engr. Seyi Makinde to look into the yearnings of his people. They deserve to know how the sum of 1 billion was spent.

FUNKE AKINDELE AND HER HALF-BAKED DECISION

I love Funke Akindele. Her story is inspiring and I spend my leisure time watching her plays on YouTube. She is a fantastic actress who understands the industry very well and she is not always tired in giving her best to her lovers. Coincidentally, I was watching a popular musical video titled “Pakurumo” by Wizkid. In this video, Funke Akindele popularly known as Jenifa danced so well. Barely few minutes I left her YouTube page, I saw a link on WhatsApp that she organised a birthday party for her hubby, I clicked on the link to read more. I felt terribly disappointed that the diva screen demi-god could be found wanting in respecting laws that guarantee the safety of everybody including millions of fans who made her. As much I love Jenifa, I consoled myself that she is just a comedienne and actress. Being a celebrity at times is never a passport for clearer thoughts I concluded.

The likes of Jenifa and her cohorts who defied orders of the Government over festivity are no different from pastors and Imams who also defied orders to worship God in large numbers when major religious cities have closed their religious centres. The likes of Tuface, Rihanna and other celebrities who donated grossly to government and complement their efforts in fight against covid-19 are not superhumans. Decisions for sustainability of humanity encompassed with greater good for mother earth are products of well refined minds. I feel terribly bad that Jenifa who was a product of people’s compassion besides her excellence performance on the screen could do less for her people rather endanger their lives the more.

I watched the video, looked at the people you honored the invitation and I nodded my head when I saw a former gubernatorial candidate who was defeated and ridiculed at the poll sitting comfortably at such illegal gathering and I could not but praise the decision of Lagosians at the poll. I give kudos for the Nigeria Police Force for their swift move. While Funke Akindele, her hubby and other offenders are isolated from the public, the government of Enugu should act swiftly and arrest the clergyman who vow to continue with his service despite clear stay at home order by the state. Nigeria is too broke to fight idiots with Covid-19.

Apagunpote Olayimika Chocomilo. He can be contacted via [email protected] or 08164411922.