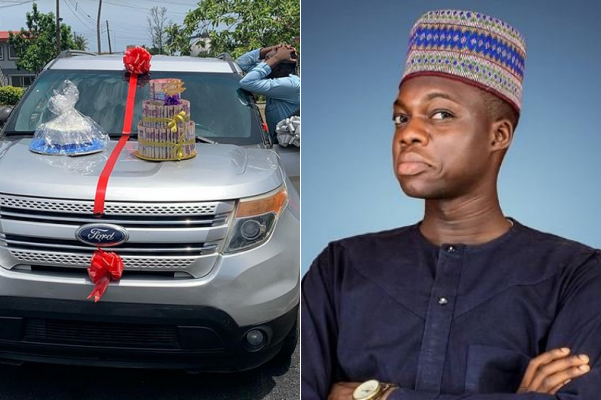 Social media comedian, Abiola Abdulgafar, popularly called the Cute Abiola who is celebrating his birthday today, April 28, happily took to his social media page to share a piece of good news with his fans and followers.

The Cute Abiola shared the photo  and videos of a car gift he got from someone he described as boss on his official Instagram page, to the surprise of his fans.

Overwhelmed by the magnitude of the gift, Abiola said that he is yet to meet the man who gifted him the car. According to him, the only major interaction they had was in 2015 when the man motivated him.

“I don’t even know what I have done to deserve this from you boss. I never even set my eyes on you before in my life and you did this for me. You only motivated me back then in 2015. I don’t even know if this is a dream. Haaaa! MY LIFE thanks so much. I don’t even know how to thank you,” Abiola, who was clearly not expecting the car gift, said.

See his post which contains the photos and video below. Swipe left to view more: