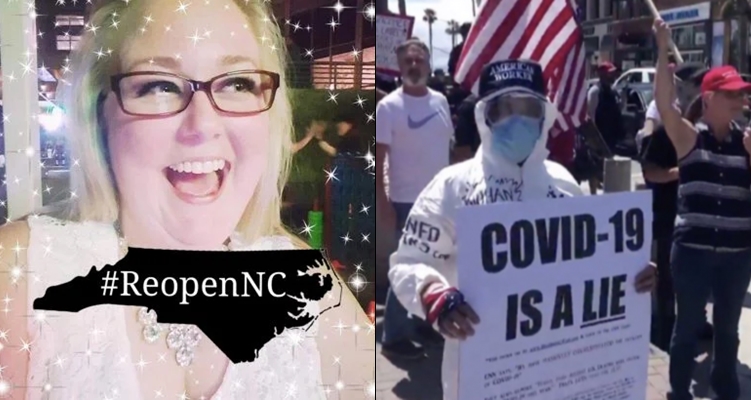 Audrey Whitlock, the famous leader of ReOpenNC, an anti-coronavirus protest in North Carolina has contracted the same virus, she believed to be a lie.

Whitlock was unable to even take part in the protest group’s first two rallies held in Raleigh because she was in quarantine after testing positive for coronavirus three weeks ago,a report said.

‘She never left her house during her quarantine, so she has not been at any rally or any of the functions that we’ve done,’ fellow organizer, Ashley Smith, told a local television station.

‘I’m not responsible for other people’s choices. I’m for personal liberty,’ Smith explained.

‘Everyone has their own decisions to make. If they want to come, that’s up to them. I’m going to be there. I’m not afraid of the virus. I’m more afraid of losing my constitutional rights and losing my livelihood than I am of the virus.’

Whitlock first revealed her coronavirus diagnosis in a private post to the group’s Facebook page on Sunday.

“As an asymptomatic COVID19 positive patient (quarantine ends 4/26),” Whitlock wrote in the message obtained by the Raleigh News and Observer. “Another concern I have is the treatment of COVID patients as it relates to other communicable diseases. I have been forced to quarantine in my home for 2 weeks,” she said.