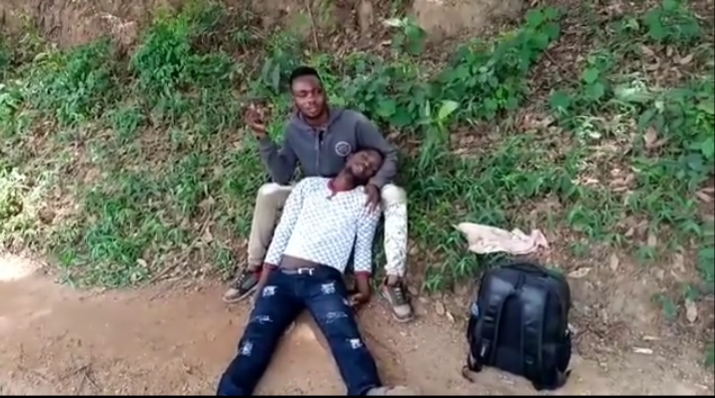 VIDEO: Driver abandons Cotonou returnee who died in his vehicle at Abeokuta

A suspected Covid-19 patient simply identified as Alex reportedly died on transit in Abeokuta, the capital of Ogun state.

This was revealed in a video shared on internet which was captured by a yet-to-be identified man who also interviewed the friend of the deceased.

Inside the video, the dead body can be seen lying helplessly on the ground while he rested his head on his friend laps.

According to the friend of the deceased, they entered a vehicle in Sagamu which was driven by an officer who works in Ijebu-Igbo.

He disclosed that the officer asked them to come out of the vehicle after he discovered that Alex is dead.

He further disclosed that Alex started his illness shortly after he left Cotonu and he has travelled around Ijebu-Igbo.

I was taking him to his brother’s house for treatment before he gave up the ghost, he added.

In a related story, WITHIN NIGERIA reported that in order to enforce full compliance with the total lockdown directive of the Federal and Ogun State governments, authorities in the state have announced the restriction of vehicular movement on 12 major roads across the state.