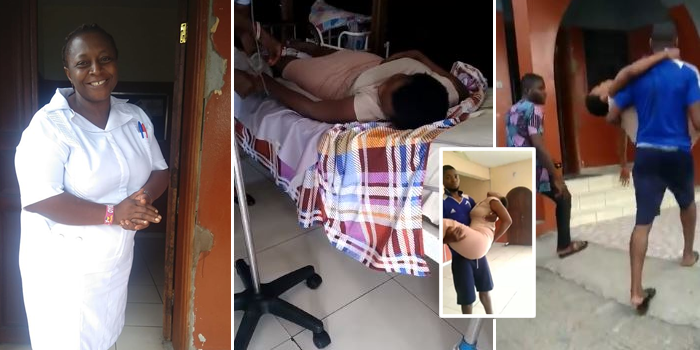 Lockdown: “Many sick people will die at home”, Nurse laments, narrates how she saved a life

A Nigerian nurse identified as Mumy B Oyigbo on social media platform facebook, took to the social platform to lament over the toll the current lockdown has taken on Nigerians especially on the residents of Rivers state where she resides.

While sharing a video on her facebook timeline, Oyigbo also shared her fears – according to her, the lockdown might be doing more harm than good as ailing residents are finding it difficult to get the care the need as there are no movements. She also noted that their is sever hunger in the land and people could die if not allowed to go out to fend for themselves.

Oyigbo narrated how she gave a man taking his wife to the hospital a ride, thereby saving the lady’s life as she was in need of medical emergency.

Sharing the video, she wrote,

Watch how this Corona virus lockdown might be leading to death in Rivers State. The girl you see in the video was almost dying her husband had to carry her on his back for long because there is no vehicle on the road. She almost fainted on the road I couldn’t record that part because I’m the only one driving. Had to help them to my hospital.
Last time I saw a more sever case where I still drove them to my hospital free of charge where we gave the girl emergency oxygen she was a second away from death.
God save us in this Rivers state. Many sick people will die at home. If hunger does not kill other sickness will because you can’t go out.
God save us in Rivers state.