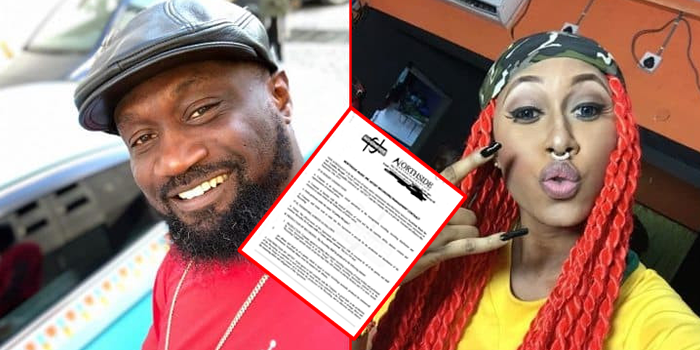 Coming after Jude Okoye released the contract her and Cynthia Morgan signed in 2013, Nigerians have taken to micro blogging platform, Twitter to apologize to him.

Recall that Jude Okoye who countered the claims made by Cynthia Morgan, had said he will be sharing the contract online.

However, in the contract which was signed in October 2013 and ran for 4 years and had a 2 year option renewal, It also had a 50-50 sharing formula and it was not stated anywhere that Cynthia Morgan would lose her name.

See some reactions fro Nigerians below, apologizing to the music executive and calling out Cynthia Morgan.

Nigerians drag Jude Okoye after what he said about Nigerian police

“So Cynthia Morgan lied? Y’all who called out Jude Okoye should better apologize to him. That her GoFundMe account should be reported. She scammed Nigerians. All of you who donated should ask for refund!!! This life eh…”

“So Cynthia Morgan scammed us all? At this point I will be forced to stop jumping on all these trends because we don’t even know the truth anymore! I blame myself seriously for attaching too much importance to this tbh”

“So Cynthia Morgan lied, wow and one girl block me on whatapp then because I post “What if Cynthia Morgan is lieing” on my status, all I said is what if, and she said I’m a wicked person…”

“So Cynthia Morgan carried people on handicap. My concern is what will happen to the people who took out of their sweat to donate something in the Gofundme account?”

“So Cynthia Morgan lied?? She understands how gullible Nigerians can be when you dangle the victims card in front of them. She studied the system for 3years and una no disappointment. A Queen, I stan”