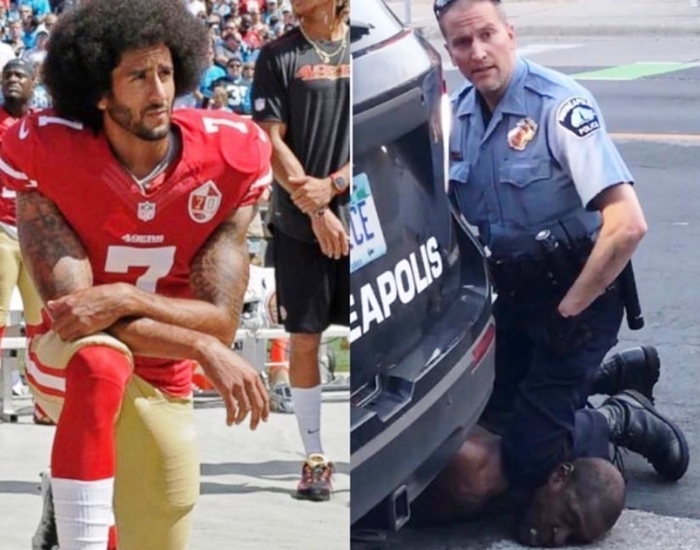 The horrific death of a Black man named George Lloyd who died on Monday, May 25, after a Minneapolis police officer forced his knee into his neck to keep him pinned to the ground, has gotten the attention of the FBI.

In a video going viral, a police officer is seen holding George down after he “physically resisted officers”.

“I can’t breathe,” he kept repeating but the cops didn’t listen.

The cop who was kneeling on his neck did not ease pressure even as the man complained.

“Get up and get in the car,” another officer is heard telling George Lloyd but it’s clear that the man can’t get up unless the officer stops holding him down.

At some point, George starts screaming for his “grandma.”

He is also heard saying: “My stomach hurts, my neck hurts, everything hurts.”

Bystanders approached the scene and told the officer to get off of the man. One person pointed out that the man’s nose had started to bleed but they didn’t listen. The man then stopped moving and appeared to be unresponsive as the ambulance arrived at the scene and placed him on the gurney to take him away.

According to CBS News, the man was later announced dead following the incident.

The video, which was captured by Facebook user Darnella Frazier, was captioned, “They killed him right in front of cup foods over south on 38th and Chicago!! No type of sympathy #POLICEBRUTALITY.”

The Minneapolis police later released a statement claiming that officers responded to a report of “forgery in progress.”

The statement continued to claim, “Officers were advised that the suspect was sitting on top of a blue car and appeared to be under the influence. Two officers arrived and located the suspect, a male believed to be in his 40s, in his car. He was ordered to step from his car. After he got out, he physically resisted officers. Officers were able to get the suspect into handcuffs and noted he appeared to be suffering medical distress. Officers called for an ambulance.”

The police continued to note that no weapons were used during the incident and body cameras were worn and activated during that time.

The officers involved were placed on paid administrative leave.

A number of Black American celebrities have reacted in outrage to George’s death.

Only one person in this photo lost their job [ ⭕️ please if you can see my last post ] hands in his pocket just another day on the job whites UP blacks down [ this man died after screaming I can’t breathe ] to my brother @kaepernick7 we love you and will continue to stand WITH you for your heart and peaceful protest……. #StandWithKap