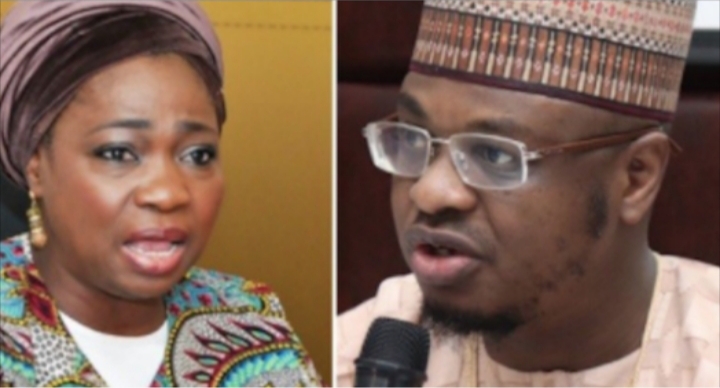 Following the exchange of hot words between the Minister of Communications and Digital Economy, Dr. Isa Patanmi and the Chief Executive Officer of the Nigerians in Diaspora Commission (NIDCOM), Abike Dabiri-Erewa over office spaces, some Nigerians on social media who felt the exchange was unnecessary have expressed their disappointment and described the act as a public show of shame.

Recall that the Chief Executive Officer of the Diaspora Commission (NIDCOM), Abike Dabiri-Erewa had gone on the social media to accuse Pantami of using armed men to evict the NIDCOM staff.

Dabiri-Erewa alleged that she and NIDCOM staff were locked and thrown out of their office.

She said: “In one year, we don’t have an office. The office we got, given to us by NCC (Nigeria Communications Commission) but we were actually driven away by the Minister of communications and Digital Economy, Mr Isa Pantami.

“Within two days, they drove us out with guns and what happened? The place was given to us by NCC.

“You know we all help each other, NCC as an agency of government said there is a place you can use to settle in and just as we settled in, I was in Ethiopia when I got a call. I thought that it was a joke.

“I came back from Ethiopia on Thursday, this happened on Tuesday. By Friday, when I went to the office, guns, armed men had taken over the place. I thought it was a joke. But here is the thing, I’m a government employee, so is he. It’s government business.”

Responding to the allegation, Dr. Pantami replied on Twitter by calling Abike Dabiri-Erewa a liar.

Pantami tweeted: “This is a fat lie from her. The owner of the building @NgComCommission has faulted her lies on their social media platforms. The minister has never given that directive to any gunman. We need to be very objective in reporting. I have never sent any gunmen there, and I have no one.”

Responding to Pantami’s tweet, Dabiri-Erewa wrote: “An Islamic scholar should not lie, Hon Minister ( Phd). You did that to me because I am a woman. Your disrespect for women is legendary. Left the ugly incident behind me since February. But please release all our office equipment. Public office is transient.”

Nigerians who felt disappointed by the public exchange of words between the duo queried their maturity in handling intra-government affairs and appealed to the duo to resolve the issue amicably.

Awwal Nasir said: “I wonder when political office holders will learn to settle internal government politics away from media. These tantrums displays a lack of communication and trust between them, It is really sad and shameful.”

Mazi Olayinka Danladi wrote: “I am so sorry and so sad that this is happening. Public office is indeed a very bad adventure. I hope our dear brother and Shaykh and Mama Diaspora will do their best to see that this is resolved without further hullabaloo. This isn’t good for the image of the nation.”

@sadeniran urged both parties to sheath their sword, adding “@DrIsaPantami,     Why not put a call through to @abikedabiri instead of this public show of shame! You are not helping the @NigeriaGov you are both serving with this open name callings… A tree can never make a forest! Hope good reasoning will prevail…”

Emma Umeh wrote: “Government of confusion, just imagine the disorganisation going on in this administration.  It’s just a shame.”

Yemisi Fakunle wrote: “My take is this, there is something grossly wrong with the seat of power in Nigeria! Where is the Fourth Estate of the Realm? Abike is like a Minister, if not pronounced as one! How on earth can agents of the same government have this kind of altercations in the public domain?

Abu Mu’meen pleaded with the duo to take their fight off the social media.

He said: “I’ll plead with you both, for Allah’s sake to take your fight off social media forum. The only things that are being damaged here are the excellent reputations that you both have.”