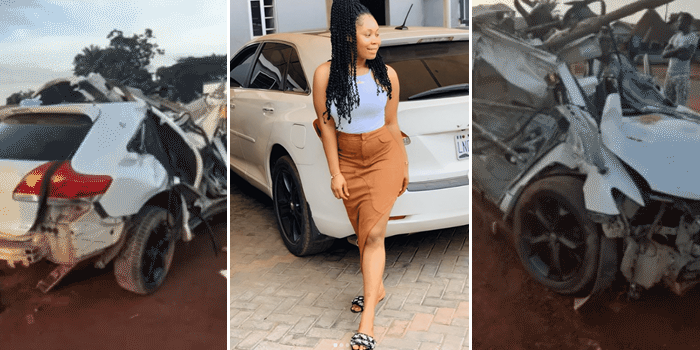 Sad as a popular Delta State baker, Achiki Okoacha, loses her life in a fatal auto crash along the Agbor road.

According to reports surrounding her demise, Achiki who was in the company of her friend, Jenny, was returning from Asaba where she had gone to deliver a cake.

The last that was seen of her was a Snapchat video made by Jenny, who is said to be currently in coma at the hospital.

The snapchat video shows Achiki driving her white Venza car, while Jenny made a video as Mayorkun’s ‘Of Lagos‘ played in the background.

In other news, Pictures of Omo babaolowo crooner, Davido using the aid of crutches to support his movement has surfaced on social media.

In the pictures, there was a cast on the 27 year old’s left leg and he was restricted to two crutches.

@Prince_ii wrote “How some people chose to enter June. Nawa. At some point yesterday we were literally thanking God there are no shows right now . Get well soon bro @davidoofficial ”