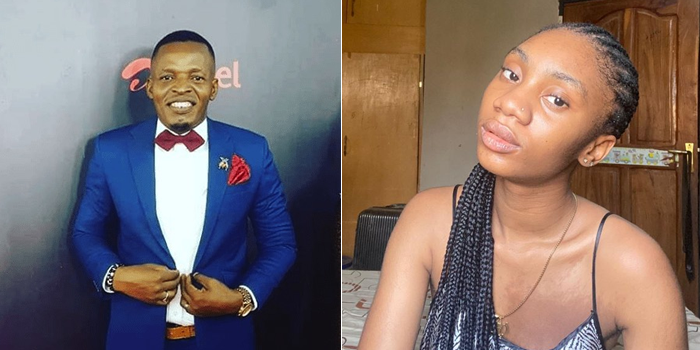 Nollywood actress, Sharon Jatto has publicly called out a movie producer Victor Okpalan who she claims demands sex in exchange for roles.

In reaction to the ongoing outrage against rapists and rape apologists in Nigeria, Sharon slammed the producer for posting the hashtag; ”Say No to Rape”.

She claimed that Okpalan auditions young girls to hunt whilst recounting her experience with him at the age of 17.

”This man had the guts to post “say no to rape” because he thinks it’s just social media aesthetics. Do you people understand this.

”This man holds auditions only for him to haunt(sic) for girls. I was barely 17 when this man asked that in exchange for a movie role I sleep with him.

”When I told him my age he said “shey you’ll soon be 18, it’s fine. He literally told me everyone in his film had to do it saying “that’s the normal thing”

”Thank God I knew I had a choice. What of people who thought that was the only way? This man has had his way with a lot of people who didn’t know they did have a choice.

”It’s disheartening. They are plenty in this Nollywood. And it has to stop. It’s not a do or die affair. Small thing they’ll say “they’ll blacklist you o”

”You people are actually mad. Please don’t hesitate to call the animals out enough is enough. And please your dreams and aspirations are valued and God’s blessings doesn’t come with a price tag.

”Your time will come” she said.

Sharon was not the only one accusing Okpalan of taking advantage of young girls, with Nollywood dream.

On Wednesday, his name trended with various accounts of his sexual escapades.

Here are some other accusers below:

His name is VICTOR OKPALAN AND HE SEXUALLY ASSAULTS YOUNG GIRLS IN NOLLYWOOD. https://t.co/uo7XI41p3w