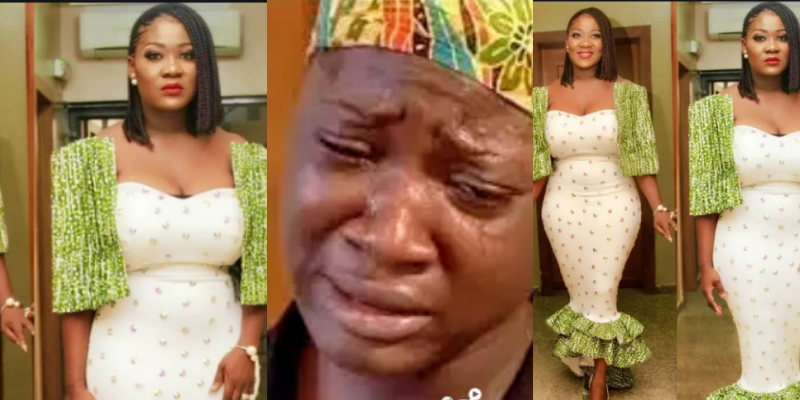 Mercy Johnson the ‘witch’, the home breaker and the many lies told against her

Controversies and scandals are two things that will always trail a celebrity and for an A-list actress like Mercy Johnson, it comes loaded.

The curvy mother of four has a fair share of controversies surrounding her. From being accused of a wayward lifestyle while she was single to alleged husband snatching to being a witch and many more.

Below are some of the many lies told against the talented wife and mother.

In 2011, a then popular Magazine; “Global News” released a mudslinging article about the actress. The headline read; “Reckless sex and controversial lifestyle of Mercy Johnson”. Read the article below…

“When news that this beautiful actress had finally decided to settle down and marry, many of the wives of men who had something to do with the actress heaved a sigh of relief. And they had a good reason to. Mercy Johnson Ozioma is one Nigerian actress who has courted scandal as a way of life. The Kogi State-born actress virtually has scandal as her middle name as she enjoys being in the news for the wrong reasons at all times.

The dark-skinned Mercy has indeed been merciless to many ladies and wives, and it would not be surprising if they ask for a special thanksgiving service in their respective churches if she eventually ties the nuptial knot in August, as widely circulated, as she has been mentioned in lurid stories of being hot pants, employing charms and habitual quarrelling she involves in.

Mercy Johnson who is blessed with nice shape confessed at a time that it was because of her boobs and hips that it was prophesied that she was going to become a good actress by a friend who walked up to her some years back. According to her, after watching actresses like Genevieve and others she “later approached a friend for assistance to feature in a movie. He stared at my boobs and hips and told me that I would make a good actress.” Little wonder she’s been accused of using the very parts in the prophetic assessment to climb the ladder in the make-believe industry.

It would be recalled that a few years back, she was alleged to have aborted a pregnancy for a man called Obi by those who are in the know. Not done with her wild lifestyle, she was at another time in a sizzling romance with Ibrahim Dumuje, another man who people accused of having skeletons in his cupboard. Mercy at that time told whoever cared to listen that she had met her Mr. Right in Ibrahim before that relationship crumbled simply because she was accused at that time of stealing some money that belonged to her then fiancé, which led to fierce quarrel… and the rest is history.”

The article was nothing but a hoax as the author was clearly making no point other than dragging her name to the mud. The author never shared details about the accusations. Details like time, date, venue, photos or even video clips. The article was based on mere hearsay as no fact was stated. The report lacks depth and substance. The accusation is not even substantiated.

Mercy Johnson got married on August 27, 2011 to Prince Odianosen Okojie from Edo state. Before the wedding, a lady named Lovely Okojie cried out that the actress was about to snatch her husband. In fact, Lovely had two children for the Edo born prince. The wedding was almost canceled as Mercy was tagged a home breaker, but the truth is, Prince Odianosen and Lovely were already separated before he met Mercy Johnson.

Lovely had already left Odi so he had to move on with his life. He found Mercy and fell in love with her.

Logically, Mercy didn’t snatch Odi from Lovely, she met him after their marriage hit the rock.

A couple of other celebrities have tagged the actress a witch. One notable one is Tonto Dikeh.

Tonto Dikeh Publicly tagged Mercy and her daughter a witch. It all started in 2013, after Mercy delivered her baby Purity in US, Tonto had blasted Mercy who had come back to Nigeria 4 months later to continue with her acting career. Tonto Dikeh (who at that time had no chill) called Mercy all sort of names, claiming Mercy’s husband pushed her immediately into acting because they were broke. At first the actress cum singer, Tonto tweeted ‘Nollywood Bridez marry horribly** #SHEBA#…Wen n if I give birth,God plz provide mii wit a husband dat can provide 4uz,Not 1 dat wld send mii bck to actin 2monthz after I born 2Huzzle’

Many who believed the tweet was referring to Mercy Johnson engaged  Tonto in a twitter war – and then Tonto dropped the bigger shell bomb as she tweeted again,

Like that wasn’t hurtful enough, she took a very direct shot at Mercy Johnson:

However in 2017, Tonto apologized to Mercy Johnson. She took to Instagram and wrote:

“Good morning world Since I have your undivided attention I better make
good use of it and not miss the blessing in this lesson!!!

@mercyjohnsonokojie Ever since I had my baby I have been reminded
constantly about an ill statement I made about one of your kids a very
long time ago. I want to use this media to say I am so sorry. I
sincerely apologize from the bottom of my heart. I had no
right to say what I did, I totally disgraced myself with that.

As a mom I do realize a lot of things I take in because of the love of
my son and I know you only took my insult because of that same love..
I am sorry MJ, I am sorry to your lil’ girl or boy..
We don’t have to love each other to realize when we are/went wrong.

I have/had no excuse for my behaviour and I also apologize to the fans I
hurt/Let down with my words that day many years ago ..To Err is human
but to forgive is divine!!!
Am not trying to be the better person,You deserve this apology for your
Child for the Love I have for God..I found God and everything in my life
changed,Let me tell you about him sometime..

God bless you and yours!!! Happy new year…
Take your time with the process of forgiving my ill mannered words to your infant but pls eventually do!!
#2017 Amending All my Wrongs
#2017 my year of positivity #Long over due apology”

A Nigerian lady, Sonia also once released a disturbing video , in which she revealed that popular actress Mercy Johnson is an alleged witch who bewitched her.
Sonia, Narrated how Mercy Johnson Bewitched, Humiliated And Treated Her like A Slave, When She Had Nothing In Life.
Fellow actress Angela Okorie took to the comment section to also accuse her of same. She wrote;
Mercy Johnson is a Witch, She did more than that to me, She fought me spiritual and physically when i confronted her”

All these are however baseless accusations as Mercy is a dedicated and devoted member of Christ Embassy church.

“She reads her Bible daily and meditate on the word of God” a source said.

“She is a kind-hearted woman, who treats everyone with love and respect they deserve” another source close to the actress revealed