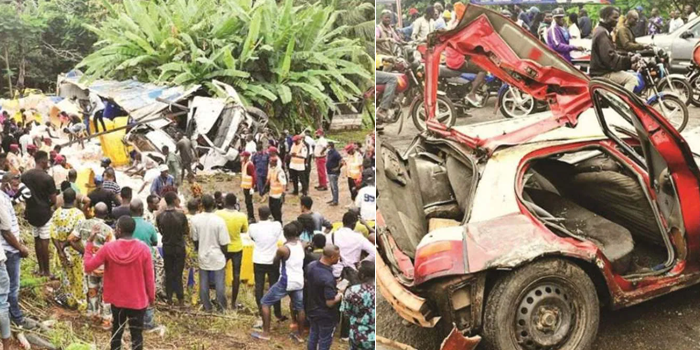 There was tragedy as a truck rammed into a passenger car and two commercial motorcycles, killing four women and injuring four others in Oyo state.

According to reports, the incident happened on Wednesday, July 1, near the popular Aleshinloye Market, Ibadan, Oyo state

The truck belongs to a popular dairy company located at Eleyele area of the city. It was gathered that the truck had a brake failure and veered off its lane crushing a Micra car and the motorcycles.

The police said, “The accident involved a Fan milk truck, a Nissan Micra and 2 motorcycles. Four women died on the spot and four other people got injured.”

In other news, a Nigerian man with the handle @Mobenjaminmusic on Twitter has narrated his experience with ”drunk” police officers in Lagos.

The young man said he was stopped by the police officers while on his way home. He said the officers asked him and others that were arrested to pay them N300, 000 before they would be released.